Remember when about all you could order at city food trucks were plain bagels tightly sealed in plastic wrap and bland sausage and peppers on underwhelming rolls? Remember when seafood — like lobster rolls and salmon burgers — was never an option when ordering from a food truck? Well, those days are — thankfully! — over. Most city food trucks now feature upscale, diverse foods, and you can find many such trucks in the City of Brotherly Love. Meet Adam Browne, owner of the Surf & Turf Truck. Traveling the Greater Philadelphia area — from LOVE Park and the Night Market in Philly to Manasquan, New Jersey, on most summer weekends — Adam and his gang offer up all sorts of seafood delights: classic lobster rolls that would make a New Englander proud, Firecracker lobster rolls (jazzed up with mango and jalapenos), shrimp rolls, salmon sliders and even surf (lobster) & turf (steak) sliders. We first stumbled upon Surf & Turf Truck’s specialties at the Philadelphia International Festival for the Arts’ closing fair on Broad Street this past April and enjoyed two different lobster rolls in the warm spring sun. We since caught up with Surf & Turf’s Adam via email — as he drives all around the area in his truck named Shelly (get it?) — to share some of his (chocolate covered) memories …

I’ve always been in the hospitality and sales industry; my wife has been in marketing and graphic design. And we were looking to do something that could combine our skills and experience.  A food truck was appealing because it is flexible — so we can go to where the crowds are — and was at a financial threshold we could handle. We wished to do something upscale and sandwich-related that we could replicate on a large-scale for big festivals. Lobster rolls came to mind.

My first job — at 13 years old — was mopping floors and re-stocking the shelves of an upscale deli and catering company in Stewart Manor, New York. My official title was “bottle boy,” and I worked after school and on weekends. After a couple of years I was trained to work the counter as a clerk, and that is where I first learned the art of a good sandwich. It wasn’t long before I was logging hours in the kitchen, doing prep-work and learning the grill. By the time I was a senior in high school, people would forfeit their place in line and wait for me to make their sandwich. Eventually I was given the keys and a manager position, leading me to an offer to buy into the business after graduating from college.

I don’t really have any stand-out, early-childhood memories relating to any specific foods, but I do remember craving my grandmother’s Irish meat pies, which she only made when my uncle Jack came into town. It was that, and I remember having great summer meals in a seafood restaurant in Freeport, New York. We would eat steamed clams. The ones with the “beard” and we were allowed to order the lobster only on our birthdays.

What foods remind you of childhood? Favorite foods growing up?

My dad was very involved in the Kiwanis Club in New York. One year, they were doing a fundraiser, and our house was turned into a restaurant for a night. I’m not sure if it was planned and my parents volunteered or if something happened with the catering hall, but I remember having to move furniture and set up tables and chairs in our den, living room and dining room. Several volunteers cooked in our kitchen with my dad — everyone had an apron made with their name on it — and the place was packed with people who had purchased tickets. Everyone had a good time, including me and my siblings who couldn’t stop laughing at the guy with “Dick” written across the front of his apron! 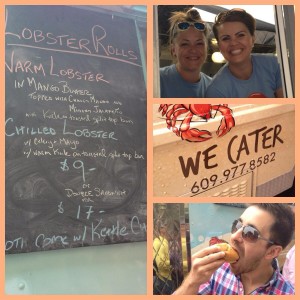 Were you a picky eater as a kid? Any foods you couldn’t stand growing up? Have you overcome those childhood fears or do they still remain to this day? Any stuff you loved eating as a child that you would never eat now?

I wasn’t really a picky eater as a kid. I pretty much ate everything to the best of my ability. One food that I used to eat that I probably wouldn’t now would be Cheerios mixed with orange juice.

Growing up, what was your favorite meal/food/snack to eat outside? Did you enjoy eating outside anywhere in particular? How about now as an adult? Any benches you love to eat on?

There wasn’t any particular food that I enjoyed eating outside; but rather it was dinner [itself] on the back patio that was my favorite. We couldn’t wait for it to be warm enough to eat outside, and I would volunteer to clean the glass on the table to help make it happen.

I’ve learned a great deal from some of the chain restaurants like Olive Garden. I [even] worked at the Macaroni Grill. Our society has sped up to such a degree that their fast-casual dining model has become extremely successful. They put out a surprisingly tasty product at an affordable price point.

I don’t have a Whole Foods nearby, but we love Wegmans. I think both offer high-quality, ready-to-eat meals.

Yelp is cool to read reviews, as long as they are recent.

Groupon can be very effective in the right location. I worked in a BYOB in New Hope where it brought in a ton of new-comers — and where the regular clientele was embarrassed to use it — but I can see where it might not be so good in other locations. Regardless, they are here to stay.

I think bloggers offer an awesome, non-biased resource for reviews on restaurants; cutting-edge, menu-twist ideas for recipes, parties and holidays. [And they do that] in real-time that you would never get in a printed medium, not to mention the coveted “back link” to a relevant site — hopefully mine, one day.

Working in an upscale deli and catering company as a teenager in Stewart Manor (New York) definitely served as the foundation for who Adam Browne is today and the food he loves to eat and serve. Adam has worked in a prominent midtown Manhattan steakhouse and a four-star hotel at the beach in Santa Monica, California. He’s learned some great things from each experience and they have led Adam to his Surf & Turf venture, which is a culmination of everything, circling back to his roots at the deli. For more information about the Surf & Turf Truck, visit SurfAndTurfTruck.com and find them on Facebook & Twitter: @SurfTurfTruck.