When you go out to your local bar to grab a bite and watch the games on a gazillion, large, flat-screen televisions, do you order a house ground Prime Angus burger, topped with foie gras, caramelized onions, house smoked bacon and a fried egg, on a Challah roll? How about mac & cheese, loaded with sun-dried tomatoes, basil pesto and lump crabmeat? Maybe an order of avocado fries (yes, avocado fries!) to accompany all that? Doesn’t sound like your local bar’s food? Meet Nicholas Mezzina, the executive chef at Misconduct Tavern in Philadelphia. Chef Mezzina passionately takes staple comfort foods and spins them wildly and deliciously into hip, modern, mouth-watering cuisine. Misconduct’s homemade hot dogs are one of the best-kept secrets in Philadelphia. And those hot dogs are no easy task. Chef Mezzina grinds his own hot dog meats and stuffs them into natural sheep casings. He then loads them up with toppings that often sound like dishes that could stand on their own. The duck & Grand Marnier dog is topped with a fennel slaw, for example. The dogs are even served on butter-toasted New England hot dog rolls. Chef Mezzina’s food truly “comforts” you, even when the team you’re cheering for is losing. We recently caught up with Chef Mezzina at Misconduct Tavern, where the nautical-themed bar was packed with fans for a big soccer match. We had a few amazing hot dogs, some suds and shared some Chocolate Covered Memories … 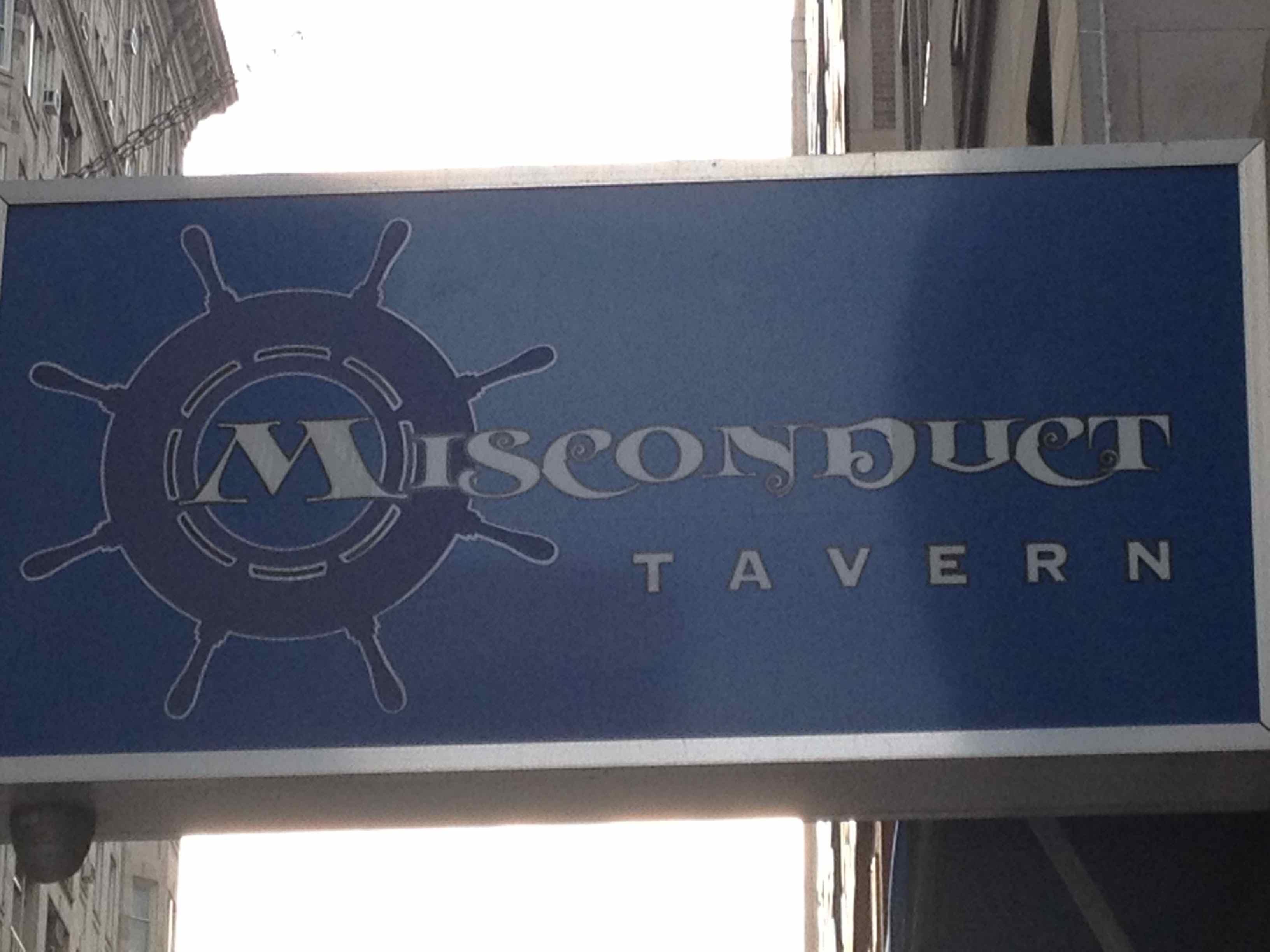 Did you have any jobs in the food industry as a child?

That first job was at a German restaurant in the Poconos area, run by a German couple. I would wash dishes and help them plate dinners at dinnertime. During the day, Rinehart, the husband, would ask me: “Do you want to learn how to cook?” And he would show me how to hold a knife, cut things, basic stuff like that. He’d let me try some stuff, and then he’d send me back to sweep the floors.

My senior year in high school, I worked for a pizzeria, making pizza. Next thing I knew, I was studying cooking full time at college, cooking in the Marine Corps, travelling around being a chef, even in Japan, ended up settling down in Philly and the rest is history.

You were a Marine Corps chef?

After graduating from Johnson & Wales, I joined the Marine Corps and was there for four years. I went to boot camp, infantry school and spent four years there, as a cook. I was stationed overseas. And then they had me do some food shows. Food shows are bizarre. You don’t have too much time to prepare. You don’t eat the food. Judges base it on presentation and the idea of the accompaniments. If I did that now, I would know what to do. You know no one is eating the food. So you can dip the fillet in gelatin, so it doesn’t get dry or moldy over four hours.

What role did food play in your family when you were growing up?

I always loved food myself. I feel like I was destined to do this. I just loved to eat. When I was a little kid, I was kind of bossy with my mother around dinnertime, saying what I wanted and how I wanted it. I’d critique it. I was like a little food brat. <laughter> I come from an Italian family, so we cooked a big meal every Sunday, always with baked ziti. My grandmother would visit and cook, and everyone came over. It was great.

There were no nights that we had McDonald’s for dinner. My mother was a stay-at-home mom for a long time for my childhood. My father owned a produce business when I was young in North Jersey. I knew all the produce. I could go in there and pick out whatever I wanted. I was 7 years old and eating mangos. I would eat fresh figs and dried figs. That was always an Italian thing, eating dried figs. After dinner every night, we’d have a piece of fruit and not really too much dessert.

To this day, I still love pickled pigs feet, which people think is gross. The really good Italian pickled pigs feet are so vinegary. It’s so great. We ate them all the time. I ate spaghetti with broccoli rabe at least twice a week as a kid. Fruit and dried figs from my father’s produce store, too.

It doesn’t sound like you were ever much of a picky eater?

I ate and eat everything. The only food I didn’t eat as a kid was hardboiled eggs. When I was a kid, my mother’s aunt was eating these hardboiled eggs, and for some reason I could never eat them again. I can eat scrambled eggs, poached eggs, hollandaise sauce. I love it all, but not hardboiled eggs. And to this day, I still can’t eat them.

My fearlessness for food worked out real well when I moved to Japan to cook for a year or two. I worked in a ski resort in the Gunma area. A lot of Japanese foods have no taste. The Konnyaku. I remember eating it, and it has no taste. And they said they eat it for the texture. It blows my mind. Why would you eat food that doesn’t have taste? But, because I’ll eat everything, I’ll always try anything once. This once time in Japan, this guy at a yakiniku place gave me this chicken piece of sushi. They just broiled it. The guy said it was fresh from his farm. He wanted to know if I was scared to eat it. I said, “No way.” I ate it. Raw chicken sushi. I had no problem with it.

Your homemade hot dogs are one of the best-kept secrets in town. Did you ever make your own hot dogs or sausages before?

Not at all. I was sitting home one day, watching a food show, probably on the Food Network. The guy on the show had all this leftover meat and was making sausages out of them. I just thought to myself. We don’t have leftovers to use, but why don’t we make our own hot dogs? But I didn’t want to make boring regular hot dogs. I wanted to make different hot dogs. So that night I brainstormed everything and came up with different flavors.

The whole process took about six months. I read up on everything about making hot dogs. I had never made hot dogs before myself. I had to wait to get a certain, unique part for the plate. I thought it was going to be easy. And it was okay at first, but it probably took six months to get it all down.

I like hot dogs just like any American does. Here we are, we’re grinding our own hamburgers, making our own hot dogs, and I had no intention of ever doing this stuff. But it’s comfort food. If you do it right, it really turns out great.

What do you think about today’s modern food world?

When I went to Johnson & Wales for culinary school in 1991, one of the guys on this pamphlet they distributed to us was Emeril Lagassi. Back then, none of us knew who he was. He was a graduate who made it big in New Orleans. We all thought that was nice and cool. And then, after the Food Network took off, it was insane.

When I started cooking, it was a blue color job, where you worked long hours. It was drilled into you that you didn’t even think about being a chef for ten years. That was how it was always taught. After the Food Network’s success, that’s when everyone started going to culinary school. When I went to school, you either went to Johnson & Wales, CIA or a place out west, if you wanted to be a chef. Or you had to work your way up from the bottom. Now we have all these schools. There are even three here in Philly now. And everyone graduates from them and wants to be chefs. The truth is they don’t know anything yet. I’ve seen guys who don’t know how to truss a chicken. And because of the Food Network, they all want to be celebrities. They see these famous chefs who don’t even have restaurants. A lot of these food celebrities wrote a cookbook and have a TV show, but they don’t really run a restaurant. Everyone thinks they can spend just one year in a kitchen, and then they can write their own cookbook or have their own TV show. I call them the culinary heroes. I think that’s been detrimental to the field in general. Just because you graduated from culinary school, doesn’t mean that you can’t still help out and wash dishes when a restaurant is slammed and busy. The celebrity chef thing? It’s just not real.

I have a very savory salty palate, and I’m not too much into sweets, even as a kid. As a child, I loved broccoli rabe and spaghetti. My father would cook it. He’d add the spaghetti to the pot full of brocolli rabe. Before dumping it all out, you’d save a quarter of the water. You’d squeeze lemon over it and add a little Parmesan cheese. To me, that was the best. People would come over, friends of mine, and they’d ask what I was eating. They found it so disgusting, but I loved it. And I still do to this day. It’s almost like a soup because of the extra water, which is basically a broth. My father is from Molfetta, Italy, and they called it ‘cime de rabe e pasta.” Don’t quote me on that spelling, though. I literally ate this twice a week growing up. Broccoli rabe was much more bitter when I was a child than it is these days. This is a really great “peasant’s one pot dish.’ I always went heavy with the lemon, and it’s just great in the summer. Enjoy my father’s cime de rabe e pasta (broccoli rabe and spaghetti).

When I worked at the German restaurant in the Poconos as a teenager, I was introduced to roulade. It’s very similar to Italian braciole, except for the German pickles and mustard. The flavors are fantastic. The pickles and mustard really come through in the finished sauce. This is one of those flavor profiles that you’ll remember the first time tasting, because you’re just not expecting the mustard and pickles. I still remember the first time I tasted this. Absolutely fantastic. Enjoy my Roulade.

Chef Nicholas Mezzina was born in New Jersey and raised in the Poconos. After graduating from Johnson & Wales University, Chef Mezzina was a chef in the Marine Corps. He then worked at The Bernards Inn in New Jersey, about which he still raves. After a stint in catering, Chef Mezzina moved to Japan to cook at little restaurants (“muzikayas”) and a ski resort in Gunma. After settling down in Philadelphia, Chef Mezzina worked at Susana Foo in Center City for a few years, about which he also still raves. Chef Mezzina has been the Executive Chef at Misconduct Tavern for three years and counting.