“If more of us valued food and cheer and song above hoarded gold, it would be a merrier world.” J.R.R. Tolkien wrote such prose in his fictional tale The Hobbit, and it’s also the motto that many people live by in the real world. Meet Gil , originator of Market Day Canelé in Philadelphia, which has been baking up classic, striated, cylinder-shaped Bordeaux canelés since 2010. These legendary pastries, which Gil and his girlfriend Nem Ngo personally sell at farmers’ markets throughout the Philadelphia area are no easy task; it took Gil months to perfect his recipe, which consists of: farm fresh eggs, natural whole milk and butter, wheat flour, sugar, dark rum, orange zest, Fleur de Sel, organic bees wax and Tahitian vanilla. As Gil explains, most canelé recipes contain the same ingredients, and more than anything, it’s the baking technique that distinguishes each pastry chef’s version from one another. In addition to their classic canelés, Market Day Canelé also bakes up savory and sweet tarts, Florentines, Fleur de Sel caramel and even Cucarachas (yes, dried chilis).

While many foods can linger on the palette, only special bites linger in the mind. Ironically, it wasn’t a canelé that lead to this feature about Gil but rather a savory tart. My mother stumbled on Market Day Canelé at the Collingswood (New Jersey) Farmers’ Market late this past summer. I ended up the beneficiary of one of the savory tarts she had purchased, and I have never been able to get that tart out of my mind since. Fresh, local ingredients — spinach, onions and cheeses — added to a rich quiche with a buttery flaky crust, which made for a memorable food experience. I recently reached out to Gil to wish him a healthy, happy new year and see if he was interested in doing a feature for CCM. Much to my delight, Gil was immediately on the case, emailing anecdotes and gorgeous photos. Gil expresses how food is about sharing experiences together, and we’re ever so happy that Gil shared his (Chocolate Covered) Memories with us … 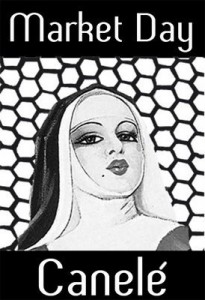 My canelé experiments occurred during the economic dark days. I was unemployed and could barely get an interview. I was baking plenty of canelé for personal consumption. I gave out a bunch and got encouragement from folks at Lacroix at the Rittenhouse and Whole Foods. The Food Trust gave me an opportunity at Headhouse Farmers’ Market, and there I was, a local artisan.

It was the 1960’s, and I was about 10 years old when I had my first job at a grocery/butcher shop. My bosses were generous and kind, a husband and wife, and they were both tattooed … with numbers on their wrists. They kept our neighborhood well supplied. Half steers would come in from the slaughterhouse. Enormous. There was no Cryovac. Those were different times. After breaking down an animal, the butchers would pan fry strips of meat on a hot plate behind the counter. Sometimes they’d toss in mushrooms and onions. They’d spear the seared meat with boning knives and shake on Worcestershire.

When I was a teen, I worked for Rustler Steakhouse, which was kind of like a cafeteria style Outback Steakhouse without alcohol. We wore cowboy outfits on the floor. I was a buser/cleaner. I really enjoyed the experience of working in the industry even as a kid. I loved meeting people and the constant production and service going on. I learned a lot from managers who were good leaders and principled.

We lived with Pierina, my Dad’s mom, in Juniata Park when I was a child. My granny was a Northern Italian with just a bit of cooking know-how. Her favorite foods to feed me: Roquefort (Société), pickled herring, Strega, veal  kidneys, squirrel (pan fried by granny and braised with onions and peppers) and spaghetti. There’d be a huge pot of tomato sauce with a small pork roast mostly-dissolved inside, colored bright red, garnished with chopped parsley; the spaghetti noodles would be in a bowl alone, steaming with a coating of oil and water. Granny was a master of brown butter. Eggs, cauliflower and pastina always got the butter treatment. Once in a while, she’d make cheesesteaks. I was devoted to cheesesteaks even then.

I recall as a little kid I’d react viscerally to flavors and scents. I was enslaved by deliciousness. I still am. I  am blessed that I can give others that unmistakable taste of what is timeless and delicious.

What foods remind you of childhood? What were your favorite foods growing up?

My mom made quite a few tasty dishes. My family is tied to Cape May, New Jersey, so dishes like fried oysters, clam spaghetti, baked clams and bouillabaisse were favorites. We have a family story of a meatloaf-sized lobster tail that was sliced down for dinner in West Cape May at my aunt Rose’s. In Philly, we ate plenty of pizza at Santucci’s, which was a neighborhood spot. My mom made excellent tomato sauce. We ate a lot of poached eggs and scrapple. Bowls and bowls of farina. My faves were chicken parm, steamed shrimp, pizza, prime ribs of beef. Grilled flank steaks were big in our crib. I loved cheesesteaks and burgers. We ate a lot of Greenman’s hoagies and also hoagies from the Pennsauken Mart! Sometimes my mom would go on an Irish jag, and we’d have stuffed cabbage and colcannon potatoes and corned beef. Rice pudding and strawberry shortcake were desert specialties.

I was a vendor in Reading Terminal Market in the 1980’s. My spot, Fireworks, a hardwood, charcoal-grill stand, was super popular. At lunch time, folks would line up three-deep waiting for a seat. One day during the lunch rush, after I stepped back from rinsing my hands, I landed on a feisty rat. It let out a screech that shocked the shit out of me. I leaped about six feet. The grill top slammed down! Customers looking on mostly laughed and kept eating.

I was chef in the 1990’s at CIGNA. They were invested in taking good care of their employees and their corporate reputation. They had a program where you could get matching funds for community service type stuff. I requested a grant to treat a group of elderly, deaf/non-verbal folks to a fine dining, holiday event. It was approved! We used the corporate dining room. I had loads of volunteers for service and cleaning, and the chefs volunteered their time. All of the department employees were into the event. The guests lived outside the city and someone managed to have transportation donated. With free labor, I was able to use pretty much all of the money on party favors for the guests and excellent food. The vendors were generous as well. It worked out great. Everyone was glad to have been together for this meal. At the conclusion of the dinner, there was a short speech, and the guests erupted in silent applause, waving their napkins. It was memorable.

Were you a picky eater as a kid?

I remember having a pretty sharp appetite. I looked forward to meals, snacks and unexpected treats. I was the oldest
and biggest. My brother said that he was smaller because I appropriated his share of nutrition.

Any foods you couldn’t stand growing up?

Have you overcome those childhood fears or do they still remain to this day?

I wouldn’t turn down a serving of craftily baked beans, but the foods that tasted wrong then still seem potentially toxic today.

Any stuff you loved eating as a child that you would never eat now?

Any childhood cooking accidents in the kitchen? As an adult?

I witnessed my dad do some crazy stuff. When we went hunting or fishing my dad had a ritual of preparing our breakfast. He loved good grub and would try to make a four- or five-dish quick breakfasts. He’d set off the fire alarms between 3:00 and 4:00AM every time. He’s noted for his Taylor pork roll with Dijon mustard on a steak sandwich roll.

As an adult, I was getting ready to rumble first-seating on a Friday night at a good size restaurant in the suburbs. We had a huge old broiler at the head of the line. With wet matches, it took me longer than it should have to get a spark. When it caught, it shot me across the kitchen, singed eyebrows, hair on fire! The dishwasher put me out.

Another time we were having floors redone, and the pantry hall was detoured for a while. On the day it finally reopened, I went bounding through and hit my head on the door jamb hard enough to get knocked out. The new floor was twp inches higher. That combined with my lope was a KO.

Growing up, what was your favorite meal/food/snack to eat outside?

Did you enjoy eating outside anywhere in particular?

Any benches you love to eat on?

In summer, I like to sit on one of the benches across from Congress Hall on the Cape May Boardwalk and eat a burger or chicken fingers.

What do you think of modern French food?

“French Food” is a nebulous rubric. In France, there are plenty of masters at work. The best cooking is fantastic and represents our times in beautiful ways. In the USA, I like Chef Ludo’s (French) style. Chef Keller is amazing, a legend. I like the principles behind Le Fooding. I like Matt Ridgway’s style. To be candid, we don’t dine out much. Tweezers get my goat.

What do you think of the modern food world (from Whole Foods to franchises like Olive Garden and Starbucks, from the Food Network to Groupon, from Yelp to foodie bloggers)?

I think everything is going in the right direction. Technology really helps with spreading information. I think that today more people are able to enjoy more good food.

Whole Foods is okay with me. I shop there often. They have certain strengths. Groupon and Olive Garden, not for me. The tactic seems to be making things cheaper than they ought to be. I’d do Starbucks in a pinch. We have the finest coffee shops in Philly, so we’re spoiled when it comes to coffee. Yelp is a soapbox pandering to the common idiot.

TV cooking shows like Jacques Pepin’s or Chef Colameco’s are great. I never turn on the dramatic and plain phony stuff. The lady chefs on TV? Are they too vain to tie up their hair and remove their jewelry? Guy Fieiri reminds me of Liberace minus the originality. I find the test kitchen folks are earnest and informative.

People love blogs and blogging. We make friends and learn stuff from them, so I feel like they are a little sad and useful at the same time. It’s therapeutic to express yourself and maybe help another at the same time.

At the end of a busy farmers’ market week in the summer, we have a ritual meal of a Sunday smoked salmon plate using produce selected at the weekend markets we’ve worked. We chow down on the deck in West Cape May with some beverages — champagne, beer, Vinho Verde, bloodies, screwdrivers, cider all work very, very well with this plate. Enjoy my Smoked Salmon Plate!

Gil Ortale lives and cooks in the City of Brotherly Love, where he bakes Market Day Canelé, serves Headhouse Farmers’ Market customers and entertains Bon Vivants in his South Philadelphia home. For more about Market Day Canelé, follow them on Facebook.