Many CCM readers ask, “Why is your blog called Chocolate Covered Memories?” I then have to explain that this blog is about food memories and that one of my childhood memories of food happens to be about chocolate covered strawberries. That being the case, you’d think that we’d have interviewed many a chocolatier by now. Surprisingly, we have not. That is, until now. Meet Diane Pinder, owner and chocolatier of Donna & Company Artisanal Chocolates. Based out of New Jersey, Donna & Co. sells their artisanal chocolates online, to independent boutique stores, to a handful of restaurants in Central Jersey and to Whole Foods (in New Jersey, New York City and Pennsylvania). You can also find their chocolates in stores as far west as Minnesota, as far north as Vermont and as far south as Delaware. Diane is also a regular vendor at Slow Food Farmer’s Markets. We recently caught up with Diane at the Brewer’s Plate, which we covered here. We sampled many of Donna & Company’s chocolates, including such flavors as olive oil and sea salt, pistachio praline, local stout and pretzel, pistachio brittle and sea salt and champagne. Since that extraordinary evening, Diane Pinder and I have emailed back and forth quite frequently and shared some “chocolate(!) covered memories” … 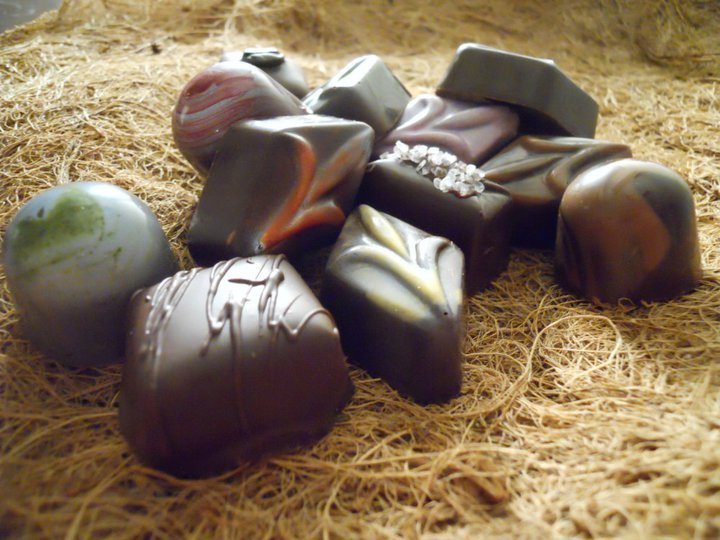 I ended up here when I decided, after a career in nursing, that I would start my own business.  My father, who worked at Duncan Hines, as I will explain later, sent me information on a chocolate franchise.  I spoke with the owner of the company, and he came to visit me.  We talked about chocolate, and I became fascinated on how chocolate was becoming more than just making molded lollipops, that it was becoming more culinary. I like to cook, and I like to experiment. So I found this to be a new medium for doing different culinary things. 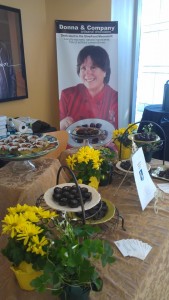 My very first job was as a busgirl at the Howard Johnson’s rest stop on the Garden State Parkway.  In the summer, I scooped ice cream and made hamburgers and hot dogs in the snack bar.

I remember making chrusciki [Polish cookies] at Easter with my grandmother who immigrated to the U.S. from Poland.  Also, I remember huge family meals at my grandparents’ house, so food was always a family and community event.  On my mother’s side, there were 29 grandchildren and about the same amount on my father’s side of the family, so when we got together, tables were set up in every room in the house to accommodate everyone.  We all took part in preparing and serving the family meals because there were so many of us. Also, in the neighborhood I lived in, many trucks would come through, selling fresh fish.  I developed a fondness for fish early on. 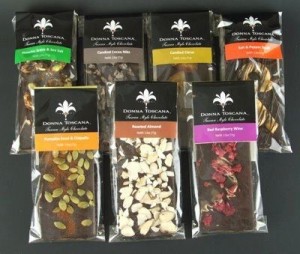 I think primarily from my father — at least he taught me that cooking food could be a great adventure.  My dad loved The Galloping Gourmet [cooking personality Graham Kerr’s TV show], and we all watched it together.  My father would prepare these elaborate meals, and we all sat down together to eat them. In fact, we always sat down together at dinner as a family, every night.

What was your favorite food growing up? What foods remind you of childhood?

When I was a kid, my father worked for Duncan Hines Cakes in Staten Island. Often he would bring the “test” brownies home, because otherwise they would get thrown out. We would put them in the freezer and eat them frozen — frozen Duncan Hines brownies were phenomenal. Our dogs even liked the smell of chocolate. My Dad’s socks always smelled like chocolate because the cake mix would fall into his shoes. Our dogs would run to get hold of his socks and chew them apart. Our nightly game would be to play toss with the chocolate covered socks while our dogs would chase back and forth trying to get hold of the socks to chew apart. That was our family entertainment when I was a kid but we all joined in, dogs, kids and parents! 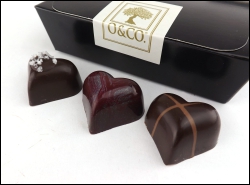 While my father was a good and adventurous cook, my mother was an awful cook. I remember she would destroy pork chops. She would chose a bad cut [of meat], and then she would overcook them until they had the consistency of cardboard.  In high school, when I took an advanced biology course and learned about trichinosis [a parasitic disease caused by eating raw or undercooked pork or wild game], I started refusing to eat pork chops when my mother cooked them, claiming I was too afraid of getting trichinosis.  Later when I started cooking for myself, I found that pork chops were delicious and became one of my favorites, especially when I stuffed them. 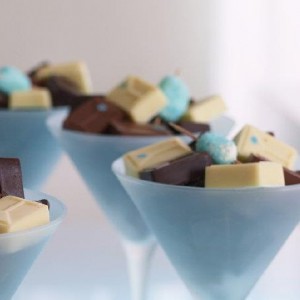 I don’t think I was picky. I just could not stand butter.  I hated the smell and was unable to eat a piece of buttered toast, even to this day.  Yet I use butter in my ganches and caramels for my chocolates.

Any stuff you loved eating as a child that you would never eat now?

I loved potato chips. Charles Chips used to deliver in our neighborhood and my mother would buy large tins of them.  I can’t even remember the last time I had chips.  Mostly because they are too high in calories and impossible to eat just one. Potato chips are amazing dipped in chocolate. 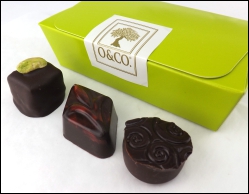 Any childhood cooking accidents/injuries in the kitchen? Any as an adult?

I had a chocolate shop in Cranford, New Jersey.  The first fall season I was open, we dipped a few hundred apples for a bar mitzvah.  As I finished the last 13 and was carrying the tray to bring them to a table for packaging, I tripped on something.  It was if in slow motion I stumbled across the room, all the while trying not to drop the apples.  I finally fell, and as I did, I hit my chin on a stool and my tooth went through my bottom lip.  I remember sitting on the floor with blood pouring down my chin.  When I poked my tongue forward and felt it go through my lip, I realized I needed to go to the hospital for stitches.

Once the stitches were in and knowing I had a project to complete, I rushed back to the kitchen to finish those last 13 chocolate covered apples so they were ready for pick-up the next day. 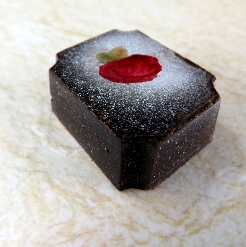 Growing up, what was your favorite meal/food/snack to eat outside? Did you enjoy eating outside anywhere in particular? How about now as an adult in Philly? Any benches you love to eat on?

We had a pool in the backyard, and in the summer we loved to barbecue.  In fact, there were frequent neighborhood pool parties and barbecues as I was growing up.  Even though my mother generally could not cook, she made a delicious macaroni salad, and I have passed the recipe to my daughter. My favorite barbecue spot in Philly has to be at my brother-in-law’s deck at his home on Fitzwater Street. 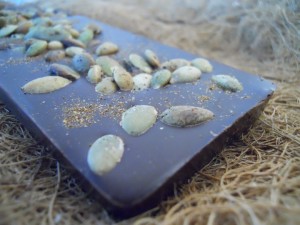 What do you think of big chocolate companies (like Hershey’s and Godiva)? Do you ever eat their chocolates?

I don’t eat Hershey or Godiva.  I do not eat anything with artificial ingredients which is what you would find in their confections.  I guess, as Paul Newman once said, “Why go out for a hamburger when you have steak at home?”

I love Whole Foods, but then I sell to them so of course I would like them.  I like them more for their support of local.  I belong to Slow Food and many of the events I participate in are supported by Whole Foods and would not happen if it wasn’t for that support.

I really don’t eat at franchises such as Olive Garden.  I prefer to eat at small family restaurants and support my local businesses.  If you look at where the best chefs are, you won’t find them in chain restaurants.

I love Food Network. I think being adventurous with food and paying attention to what you are eating is all because of Food Network.

I don’t think there is a place for Groupon in the artisanal food world, so I have never used them for business or personal reasons.  Making an artisanal product takes a lot of work and quality ingredients, and a Groupon campaign would just belittle the effort involved to make a quality product.

I love food bloggers. I get some of the best recipes to try at home from them. 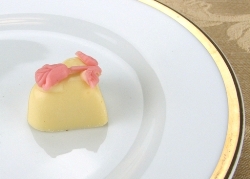 Before I became a chocolatier I use to think I would open an Italian seafood restaurant. Years ago, I was an avid fisherperson.  I would go to Cape Cod to catch cod, flounder and pollock.  I would go deep-sea fishing for whiting in the middle of the winter.  I could expertly filet and skin my fish.

One of my best recipes is the one I make on Christmas eve, a bouillabaisse. Every time you reheat it, the flavor gets better and better.  And it is the best for dipping bread into the sauce.  It is one of those recipes that you just throw everything into the pot and taste every once in a while to tweak the flavor. Enjoy my Christmas Eve Bouillabaisse!

Diane Pinder is the owner and chocolatier of Donna & Company Artisanal Chocolates, based out of New Jersey. A former critical care nurse, Pinder learned her chocolatier skills in New York, Connecticut and Italy. Her hand-crafted artisanal chocolates are inspired by the chocolate masters of Tuscany and are guided by the Slow Food commitment to quality, community and the environment. By selling specially marked chocolate bars and gift baskets, Pinder works and raises money for the Fisher House Foundation, a non-profit organization which builds homes-away-from-home for families of patients receiving medical care at major military and VA medical centers. For more information on Donna & Company, visit: http://www.shopdonna.com/ and their Facebook page.