The inner-child in you still wants to v-line for the door and run to the sidewalk waving a dollar bill in the air when you hear the sounds of the ice cream truck passing outside. When you’re soaking in the sun on the beach in the summer, you wait with anxious anticipation for a bell to start ringing so you can race to grab a popsicle from the ice cream bike kid. You laugh, recalling when the question “What’s your favorite flavor?” could only be answered with one of three flavors: chocolate, vanilla or strawberry. Meet Martin Brown of Little Baby’s Ice Cream. If you’re in Philadelphia, you’ve probably seen Martin and his friends, Pete and Jeffrey, serving handmade, super-premium ice creams and non-dairy frozen desserts, right out of a hip tricycle-towing ice cream cooler/stand/cart at various festivals and events around town. With a surprising alternative rock background, the three musician friends now “compose” some of the most modern, hip, creative and delicious ice cream you’ll find anywhere around: Blueberry Ginger, Vegan Coconut Tea, Balsamic Banana and even Hawaiian Pizza (yes, that’s “Hawaiian Pizza” ice cream), just to name a few of LBIC’s flavors. We caught up with Martin, Pete and the Little Baby’s Ice Cream gang recently, when they were scooping away at the Kensington Kinetic Sculpture Derby. We chatted about their one year anniversary, their upcoming scoop shop and, of course, their Chocolate Covered Memories …

How did you find yourself in the ice cream world?

I was playing in an indie-rock band for a few years. Thus, my week typically consisted of coming home from work and going straight to a rehearsal or to record. I never made dinner and typically ate three meals a day that were not homemade. When my band broke up, I found it ridiculous that I didn’t know how to make simple things like pasta sauce or a loaf of bread. I had a lot more free time to come home and make dinner. I bought every kitchen gadget I could find. I soon found that the ice cream machine was the most fun and creative to play with. Then, I just happened to stumble upon two musician acquaintances who felt the same way I did. The rest is history in the making. 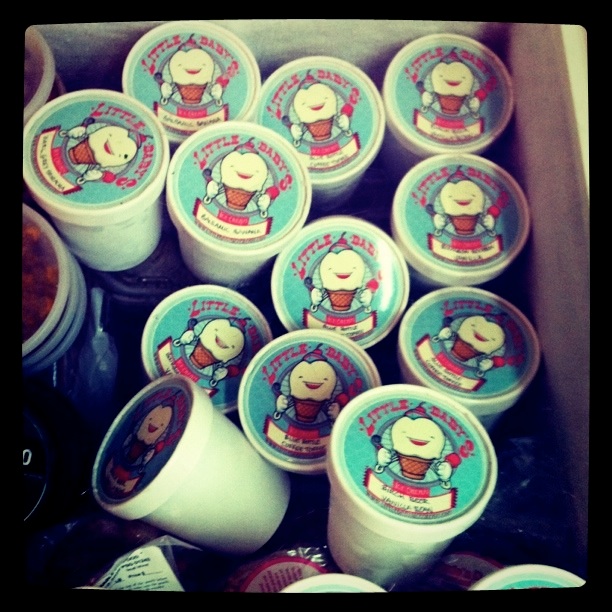 I would have to say summer vacations on Cape Cod: lobster rolls sold at church yard sales, fried shrimp and milkshakes at beach stands, and lobsters and clam chowder at Moby Dick’s in Wellfleet [Massachusetts].

Not surprisingly, it comes from that same place. Really it’s that concept of vacation and travel. The idea that a good meal or a perfect snack can transport you to a different time and place that is more relaxing and more exotic.

Anything in the crustacean family: shrimp, lobsters, crabs. 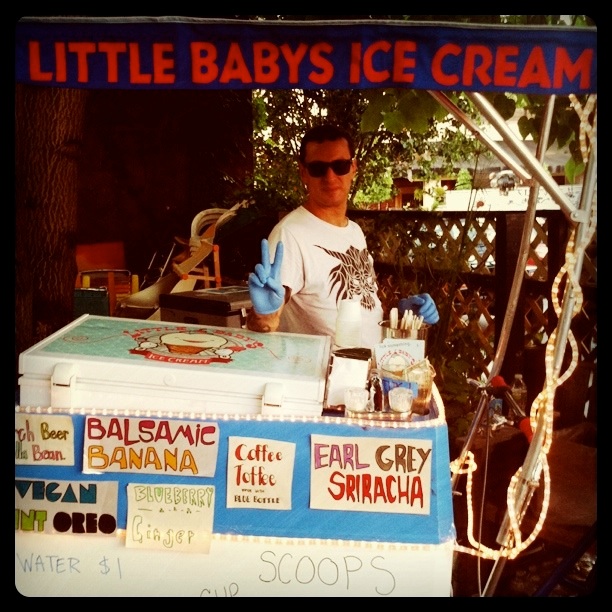 Do you recall any specific food memories/stories from your childhood?

My family was not huge on regular family dining or even special holidays. But growing up in Maryland, it was a regular occurrence to eat bushels of crabs with my aunt, her family, my cousins and friends by her pool once or twice a summer. It is easily my favorite cultural and familial food experience. For the past 5 years, I’ve hosted an annual crab feast in my backyard in Philly to try to re-live that experience. I don’t always get to go to the beach or see fireworks on the 4th of July, but summer isn’t summer without eating some crabs. 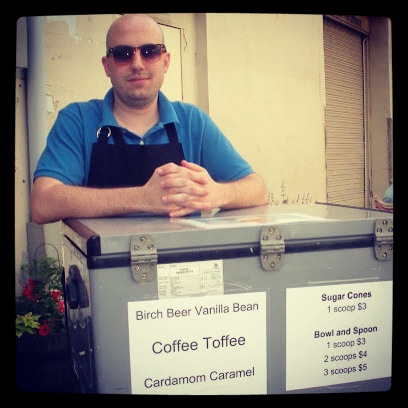 What do you think of the modern food world where Whole Foods and Boston Market encourage us to buy already-prepared meals?

I don’t give it too much thought, honestly. I’m still a very busy person and appreciate that you can get a decent meal already prepared if need be. Part of my own self-education as a food lover was realizing that this was a convenience (and one that you pay for) and not a necessity. I really wanted to break free from that world. What’s sad now is I sometimes can come close to making a restaurant-quality plate of pasta, but I still love ordering from Circles [Thai delivery in South Philadelphia]. I wouldn’t fault Whole Foods or Boston Market in any way. I think it has to do with our education system. I feel disgusted when I look back on my high school education and realize I had to take calculus and 3 years of Latin but no one ever showed me how to feed myself, how to make a batch of chili or a vinaigrette dressing. I’ve used Latin once, and I’ve never used calculus in the real world. Despite my intelligence, I still have to feed myself every day. 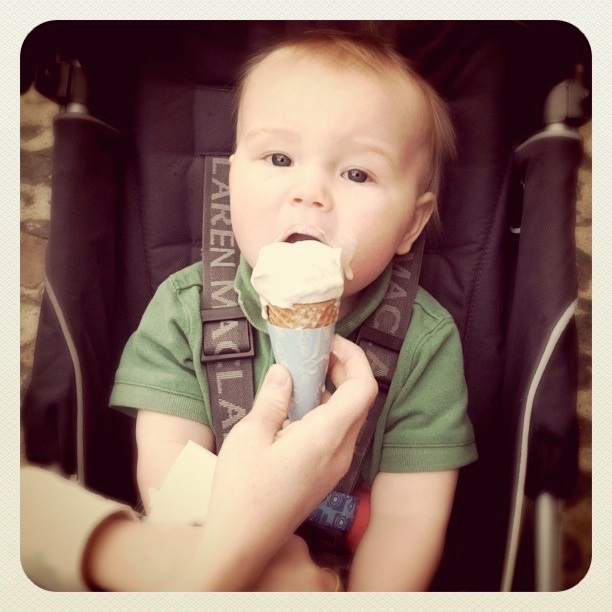 How do you guys plan on compete with larger companies in town like Ben & Jerry’s?

Well right now, I don’t think of Ben & Jerry’s as competition. In fact, we’ve tried to mimic them in a lot of ways; it’s hard for any ice cream company not to. Ben & Jerry’s revolutionized the ice cream business as well as the act of doing business in general. They made super-premium ice cream (high butterfat, low over-run) the industry standard and became so widespread so quickly that some people won’t even consider eating ice cream unless it has huge chunks of something in it and a whacky name. They also championed how a triple bottom line business could be successful and fun.

Though the desire has been strong we’ve avoided naming our flavors with clever monikers or pop-culture celebrities. We want the flavor names to be exactly what you taste. That may not sound creative, original or outside-the-box at all but it has led us to some interesting flavor combinations like Earl Grey/Sriracha. We want to make an ice cream that is indigenous to Philadelphia, respectful of tradition but very much living in the future.

Ben & Jerry’s is so big now that they really can’t adapt or change, thus creating a great void for niche companies like us to fill. Ben & Jerry’s will unfortunately run the route of only being able to put new combinations of chunks in the same old ice cream and name it after some celebrity from now until the end of time. We can make flavors that no one has even heard of. We can make vegan ice cream that is just as good as our dairy product. We can package our ice cream however we want. The world is our oyster. We could make oyster ice cream (and have thought about it – but the health department would probably shut us down). Ben & Jerry’s has set a well worn path for us to hop on and off when and where we choose. 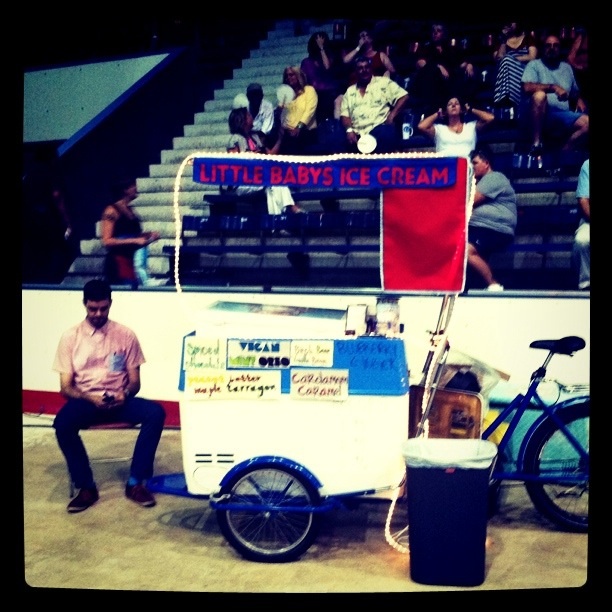 What do you think of the modern “fast food ice cream” world, like Dairy Queen and Baskin-Robbins partnering with drive-thru Dunkin Donuts?

Again, I don’t give it much thought. In fact, I kind of respect it in the terms of being a large icon of food Americana. Unfortunately, the biggest downside is that it is all that most people know of ice cream or expect of ice cream. It’s hard to charge someone $5 for an ice cream cone when they can get one at DQ for $1.99. To us and to our targeted customers, there is a great difference. But, to a lot of people, I’m sure there’s not. When you are using local, organic dairy, with organic, seasonal fruit, served in a handmade waffle cone, you have to charge five dollars for that product. Americans love frozen desserts, so there will always be soft serve and novelty ice cream that is super cheap and super fast. However, this is not the ice cream and not the service we have chosen to provide to our customers. 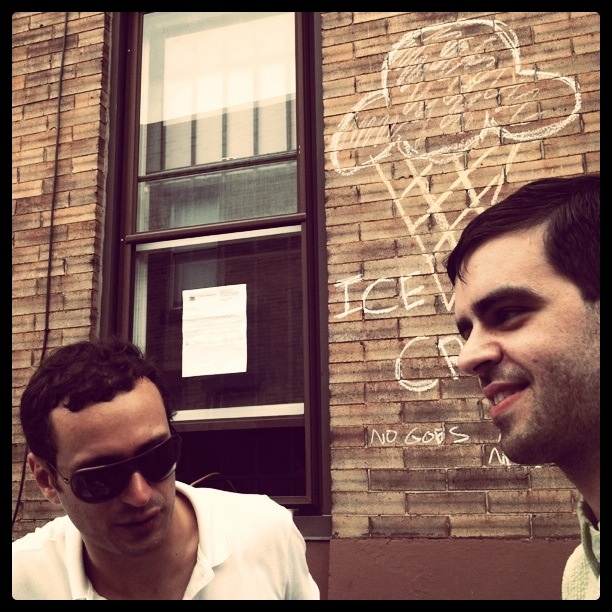 Again, my family was not huge on home cooked meals or massive Thanksgiving dinners. To me, there is no greater meal than a couple dozen steamed and spiced Maryland blue crabs washed down with cold beer and some ice cream, of course. Many of these interview questions have inspired a nostalgia in me that urge me to encourage others to value home cooked meals, canning, pickling, brewing, baking, curing, grilling and whatever will continue the tradition of the family recipe. Do it to learn it, do it with someone you love, do it out of habit and tradition. At Little Baby’s, we hope to create new memories and traditions and to have you all be a part of it starting this spring.

Martin Brown is a native of Rockville, Maryland. He moved to Philadelphia in 2000 to study music at the University of the Arts. Martin has worked as a professional musician, music educator and arts administrator. In the fall of 2010, he teamed up with partners Pete Angevine and Jeffrey Ziga, creating Little Baby’s Ice Cream, to bring unique ice cream to the streets of Philadelphia.