In this modern day, it’s impossible to travel too far without encountering a Whole Foods, Trader Joe’s or Wegmans. If you’re of a certain age, you remember a time when there were often many local, independently-owned, health food stores where you could grab healthy cuisine and products. Meet Tim McFarlane. Tim is the manager at Essene Market & Café (Philadelphia, Pennsylvania). One of the original, personally-owned, natural food stores, Essene Market first opened back in 1969 as a little shop on South Street, and it just kept expanding. In 1988, they outgrew their space and moved to their current location, the corner of 4th and Monroe Streets (just south of Bainbridge Street). They first owned one unit, then ended up buying the neighboring unit and taking over the entire corner. Essene Market offers everything from natural foods, fruits, vegetables and even natural beauty products. Essene’s deli, bakery and café are all stocked to the brim with delicious, healthy delights. Essene is that rare market where the staff knows the local customers, who want certain ingredients and products they cannot find at Whole Foods. According to Tim, visiting shoppers from around the country say there’s nothing like Essene Market, even people from California who have health food stores on practically every corner. We recently caught up with Tim McFarlane at Essene Market, sipped some organic beverages and shared some (Chocolate Covered) Memories …

How did you end up in this niche of the food industry?

I’ve worked in food retail since I was 15 years old. I started out in a small, neighborhood supermarket in Philadelphia, bagging groceries and doing this and that. Back then, I just needed a job.

I’ve been here at Essene since 1990. At the time, when I started here, I was in college at Temple, studying art. I had been working at another natural food store, Nature Food Centre, which was at the corner of 11th and Chestnut Streets. I started here as a stock guy. Now, as a manager, I’ve done everything from bagging to managing and in between. 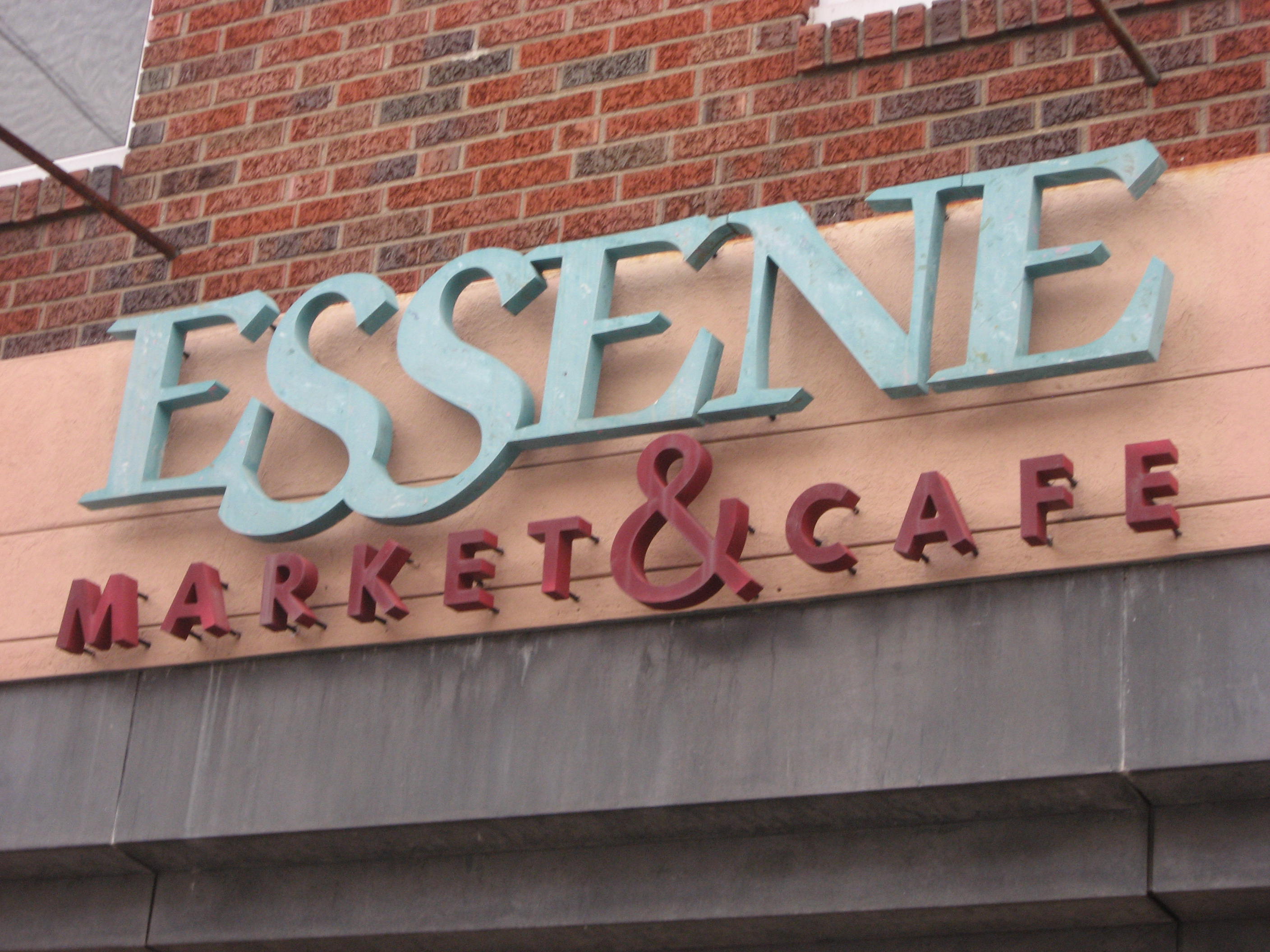 What role did food play in your childhood?

I grew up in Philadelphia, but my father was from Charleston, South Carolina, in the South. So there were a lot of black southern influences in our food: collard greens with pork or ham, fried chicken, pork chops and chitterlings (cleaned pig intestines; pronounced “chitlins”), which were “thankfully” an infrequent part of our meals. I say “thankfully” because the smell that they gave off when cooking was less than appetizing. My father treated them like snacks and ate them with tons of hot sauce.

Fish was a big part of our meals. I remember my father coming home with whole catfish that he would de-bone, gut and freeze for later use.

My mother would have me help her out in the kitchen when I was small, so I learned how to cook from watching her. My father, on the other hand, could burn boiling water. The only setting he knew on the stove was “high.” My grandmother from my mother’s side, from Philadelphia, was a great cook. She cooked a lot. As an only child, I think I got to eat a little more of what I wanted to than my friends who had lots of siblings. Sometimes, at least.

Luckily, I paid attention to some of what my mother did in the kitchen. By the time I was thirteen years old, I was able to make simple dishes on my own. As I progressed through my teens, I became better at cooking and expanded my knowledge about food to include vegetarian options.

Growing up, like any Philly kid, I used to like Tastykakes and candy, of course. I attended the Smith Walter G School (for elementary/grade school), and there was a candy store across the street, as was common a lot in those days. We would scoot across the street and load up on big bags of candy for maybe five cents. My favorites included: Jolly Ranchers (especially cherry, watermelon and apple), Now & Laters and Mike And Ike fruit candies.

I loved Coca-Cola. There was a period in my young life when I used to down those big, 2-liter bottles of sodas all at once. I even drank Sky Blue soda. It’s so bad, but I loved that stuff. I really loved Hostess Suzy Q’s, too. I liked putting them in the freezer for a couple of hours so they would be slightly hard when I ate them. I really liked that (unhealthy) cream. <laughs>

This is pretty funny, looking back. I mean, I’m a fairly healthy man now these days. I don’t eat red meat. I haven’t touched McDonalds in about 30 years. But, I ate all that junk and candy just like any kid back in the day.

Were you a picky eater growing up?

Even as a kid, I actually ate a lot of different things. The only time I was super picky was with okra. I remember when I encountered okra for the first time. My grandmother cooked it. It was so slimy, and I threw up on the plate right then and there. I didn’t touch that stuff for a long time thereafter. Even now, I’m still hesitant sometimes. <laughs> Also, I really wouldn’t eat fish as a kid, unless it was fried, hard and crunchy.

How do you feel about the modern food industry?

The food industry seems to have consolidated into just a few big major companies. When you shop at a regular supermarket now, you’ll see the same companies all over the shelving in the store. Meanwhile, the offerings of each type of product, in most places, have shrunk. The flip side of that is that the natural, organic food industry has really influenced the more mainstream industry. Now we have regular supermarkets serving organic foods and vegetables, which is great.

You factor in the prevalence of local boutiques, pop ups, urban farms, even the Food Network on television. We didn’t have that exposure to so many different types of foods from around the world and the country just a few years ago.

Here at Essene Market, admittedly, we initially felt a lot of effects when Whole Foods opened down on South Street some ten years ago or so. We felt a definite hit. First, they seemed like they were coming in and trying to cypher off the mainstream stores (like Super Fresh), but the smaller stores took the real hit. The thing about us that makes us unique is that we carry a whole bunch of products that Whole Foods won’t carry. I think that’s one of the things that make us so successful after all this time. All our baked goods are 100% vegan; there’s no animal products in them, not even eggs. Our hot food is made right here in the store; it’s not trucked in and never frozen. We have a very loyal customer base.

We’ve made adjustments to how we buy things so we can give our customers the best prices at the best products. We can’t compete with a Whole Foods on certain levels because they buy for so many stores. We offer tremendous services and the best foods. Our produce section is at least 95% organic, and we try to buy local when the food is available. We keep it all fresh and good-looking.

It sounds as if your work has had a serious impact on your healthy lifestyle.

First, in my 20s, Nature Food Centre opened up the options I had for the non meat-based diet I was beginning to move towards. Then, when I began working here, well, Essene was miles beyond Nature Food Centre in terms of its approach to natural foods with its wide selection of fresh organic produce, the fresh meals at the prepared food bar, along with a big selection of natural and organic dry goods, vitamins and beauty care products. I had been a vegetarian for a couple of years before working at Essene, and having direct access to what Essene had to offer was, and continues to be, a godsend.

I like to cook, but I’m finding that I have little time and, sometimes, even little patience for gathering ingredients for complicated meals. Additionally, my wife, Eva, and I have conflicting work schedules, which makes things difficult. So we have found that the quicker we can make a meal, the better. My way of cooking tends to be to bring a hodge-podge of things together to make a meal, and I don’t really follow exact recipes and will put all sorts of flavors together, sometimes to the detriment of my (and Eva’s) taste buds.

Like a lot of relationships, the union between Eva and myself is a good example of how “opposites attract.” For the purposes of this feature, I will stick to the differences in food tastes. The biggest difference is that I am a vegetarian and Eva comes from a background where meat is a part of almost every dish. That said, we have come up with meat-free compromises, like our Quick Paprika Garbanzo dish.  Enjoy! 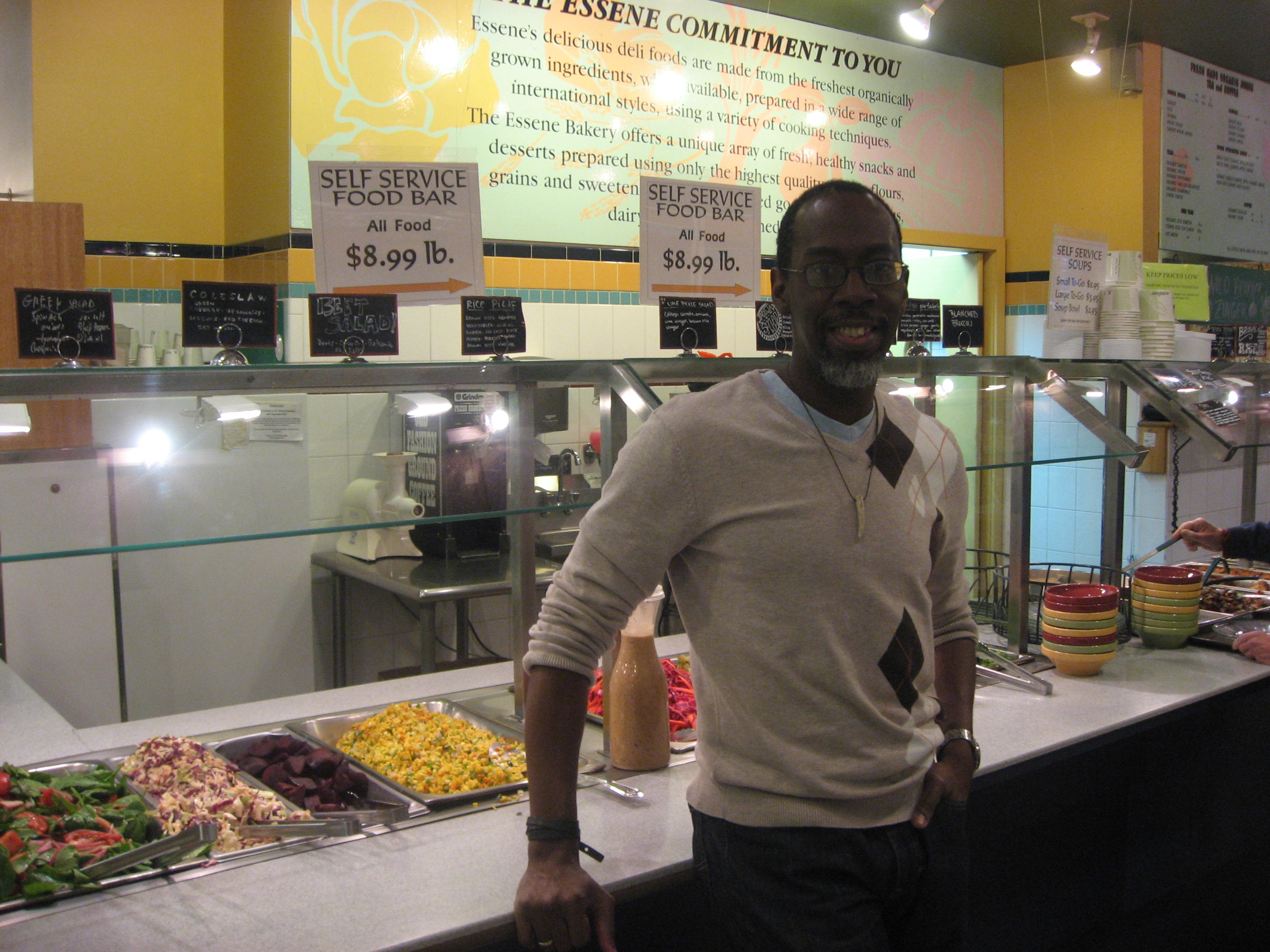 Tim McFarlane, a native Philadelphian, born and raised, has been the manager at Essene Market & Café (Philadelphia) since 1994. As a child, Tim was raised mostly on a southern diet; now, he leads an extremely healthy, vegetarian-influenced life. Tim originally worked at the now-defunct Nature Food Centre (Philadelphia) and joined Essene Market & Café in 1990. Working at Essene has enabled Tim, a graduate of Temple University’s Tyler School of Art, to pursue his career as a fine art painter to the point of being represented for the past ten years by the Bridgette Mayer Gallery in Philadelphia, one of the region’s top galleries. Tim’s pursuit of a more vegetarian diet and desire to pursue his creative impulses has created a nearly perfect, symbiotic relationship. For more about Tim and his art, visit: www.timmcfarlane.com.