This year, a few of us again got together over a few days this past week to celebrate Yauch’s music and message over Beastie Boys-inspired food and drink — with many new stops — throughout Philadelphia and the Greater Delaware Valley, playing Beastie Boys on the jukebox wherever we dined and sipped, and we culminated that week at a public Beastie Boys themed event at American Sardine Bar on Saturday August 5th. We encourage all Beastie Boys fans (and bars/restaurants) everywhere to celebrate similarly all week long and every year on August 5th.

Thank you, Adam Yauch, for everything. For the fourth year in a row, we eat and drink in your honor. Happy Birthday, MCA! 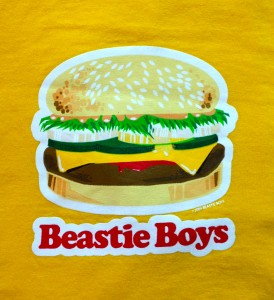 We started off our food tour with a cup of coffee from Gran Caffe L’Aquila and two donuts from Beiler’s Donuts in the Reading Terminal Market — instead of Dunkin’ Donuts.

As we detailed our first year, many people think a Brass Monkey is a malt liquor bottle with some orange juice added after the first few sips of brew. Well, according to Mike D, their famous song is based on a premixed cocktail of rum, vodka and orange juice. We indulged in a few Brass Monkey cocktails this week. Bartender Adam at Jose Pistola’s expertly mixed up equal parts rum, vodka & orange juice over some rocks.

American Sardine Bar made a traditional Brass Monkey for our event, comprised of Two Roads Brewing Co. dry-hopped Pilsner and a splash of orange juice.

They also made a “Hot Sauce Committee” Michelada, which was hot, spicy & funky — just like a good ole’ Beastie Boys song!

This year we were able to enjoy some “def ale” (a rare Two Roads Brewing Co. Persian Lime Gose. which will be on draft at our event at ASB) and a Lime Margarita French Macaron from Miel Patesserie.

The first year, we microwaved up some White Castle sliders. (Of note, there are no White Castles nearby Philly anymore.) This year, Chef Doreen DeMarco made some awesome White Castle-inspired sliders for our Beastie Boys/Two Roads Brewing event on MCA’s Birthday at American Sardine Bar …

Of course, we had to eat sardines at American Sardine Bar in the Point Breeze area, just like we’ve done every year. ASB’s owner, John Longacre, is a huge Beastie Boys fan, and rumor has it that he used the Beastie Boys as inspiration when selecting the bar’s name, theme and menu. Indeed, sardines are always on the menu, and an opened, sardine can sculpture, high above the front door, greets customers as they enter. They always have sardines four-ways (Grilled, Sauteed, Plancha or Fried) and Sardine sandwiches, too …

We visited Dan Dan in Center City to enjoy the cool crunch of cucumbers with a spicy Sichuan spice. Dan Dan’s Anthony rocks!

Chef DeMarco made sure to have the awesome fried chicken sandwich on the menu at American Sardine Bar for our event this year, so we pair that with a couple pickled eggs in honor of “Egg Man.” We elected to drink Two Roads beers, once again, instead of Heinekens though.

This year, we went to Misconduct Tavern and enjoyed their awesome mac & cheese with pesto in honor of Q-Tip (who guests on “Get It Together”).

This year, we went to The Wooden Match in Bethlehem for our “burger course.” We’ve had many outrageously-great burgers here! This time we went with the lamb burger — a gyro-seasoned lamb patty, shredded romaine, tzatziki, smoked tomato jam, herb goat cheese, and charred red onion on a Wooden Match-branded brioche roll. So good!

Regarding the Beastie Boys’ cherry, apple, peach and plum, we decided to visit this throughout the week …

For the “cherry,” we went to Gran Caffe L’Aquila and ordered “desire” (cherry) gelato (the best in the world!) …

For the “apple,” we enjoyed a classic Jewish apple cake slice from Schlesinger’s, which we think the Beastie Boys would have definitely enjoyed.

And for the “peach” and “plum,” we enjoyed some fresh peaches and plums from Iovine Brothers Produce Market in the Reading Terminal Market — plus a peach saffron French macaron from Miel Patisserie.

While at Dan Dan (where we had the spicy cucumbers, as mentioned above), we also enjoyed the Dry Pot Chicken, which is served in a mini-wok. No pinches on the neck from Mr. Spock though.

As mentioned above (see our coffee & cherry “courses”), we dined at Gran Caffe L’Aquila, where we enjoyed the special pasta dish of the week — Pansotti, hand-rolled ravioli filled with fresh herbs and Ricotta, topped with a white walnut-Parmigiano pesto!

“When I’m in Holland, I eat the pannenkoeken” — Super Disco Disco Breakin’

Once again, we desperately tried to find pannenkoeken (Dutch pancakes) in Philly. While we still have yet to find them, we enjoyed some potato pancakes with apple sauce at Schlesinger’s (where we also got some great Jewish apple cake, as mentioned above).

Once again, we ended our tour by indulging in sweets. This year, we enjoyed some “nice” bon bons in the form of truffles from Mueller Chocolate Co. in the Reading Terminal Market.

And, yes, three years ago, we drove long and far to find a Carvel that makes the infamous Cookie Puss ice cream cake. (Note, the Beasties had to change the spelling of the album and song for legal reasons.)

And there you have it, many (many!) bites/sips later, we’ve completed our fourth annual Beastie Boys-inspired food/drink tour in honor of Adam “MCA” Yauch. We look forward to doing this again next year and every year on the weekend/week before August 5th.

In addition to being the founder/editor of this Chocolate Covered Memories blog, Lee Porter is the writer/producer of the award-winning comedy Web series My Ruined Life, the Philadelphia beer reporter for Ale Street News, the editor of the comic book ADAM 12, the Eastern Pennsylvania territory manager for Two Roads Brewing Co. and a member of the Board of Director of Azuka Theatre. Lee lives in Philadelphia and is still on a mission to find pannenkoeken in Philly, drink a Ballentine quart (“Ballantine quarts with the puzzle on the cap” — High Plain Drifter) and black and tans (“Concoct a black and tan in my brandy snifter” — High Plain Drifter) next year during the week before MCA’s BDay …

Did we miss anything else (that’s not in this year or the last few years‘ food/drink tours)? Do you know where to find pannenkoeken in Philly? Let us know in the comments section below. And swing by our Beastie Boys/Two Roads Brewing event at American Sardine Bar this Saturday August 5th! Cheers!