This past Sunday was Fair Food‘s 13th annual Brewer’s Plate, an evening full of fine local foods and craft beers. Returning to the gorgeous Kimmel Center for the fourth year in a row, the evening featured more than 1000 food and craft beer enthusiasts — eating, drinking, mingling and dancing on three floors.

Once again between bites and sips, we set out to find the the stories behind the food industry folk who craft cuisine and brews from local goods. We asked some of The Brewer’s Plate’s chefs, bakers, brewers and owners to share their (Chocolate Covered) Memories regarding one question … 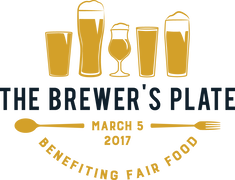 Honoring The Brewer’s Plate’s 13th anniversary this year and since some people are superstitious of the number 13, are you superstitious? Any superstitions or lucky/unlucky stories from the kitchen, bar, farm and/or brewery?

2nd Story Brewing Co.‘s head brewer Jason Ranck:  About a week before Brewer’s Plate I dislocated my knee in the brewery doing something very mundane, connecting a hose. Not sure that this had anything to do with the 13th anniversary of the event, but I can say this….getting old sucks. Sounds like I missed an amazing event and I’m really looking forward to next year!

Alla Spina‘s general manager Ryan Browning:  While I am not very superstitious, my grandparents were! They were originally from the coalfields of West Virginia, and as a kid, we were always cautioned against strange black cats, playing near crows, and giving knives as gifts. Giving a knife suspected to sever the friendship between giver and recipient, but my grandfather’s work around was to give a penny with the knife to return as ‘payment.’

Bru Craft & Wurst‘s chef Craig Meyers:  First, considering this was my first Brewer’s Plate, I did not know what to expect. I had heard great things about the event years passed and was not letdown. It was a fulfilling experience for our staff as well as myself, and I can’t wait to do it again next year. As for superstitions, I don’t have many. If I start to let that type of thinking in, it is a slippery slope to catastrophe. I just am glad to be a part of the festivities.

City Tap House – University City‘s executive chef Ashley Grim:  As far as bad luck stories go, yes I have two, and they both revolve around the beignets [served at this year’s Brewer’s Plate]. So this past Saturday afternoon, I spent 3-4 hours rolling out all of the dough for both the beignets and pierogis [to be served at this year’s Brewer’s Plate]. Everything was cut, stacked on sheet trays, ready to go for the next day. The plan was to fry the beignets early (7am), because we had the Pliney the Younger event starting at 10am — busy, busy day scheduled. At 8:15am, I got a frantic text from my pastry chef saying the beignets weren’t rising … Oh no! I’ve never jumped out of bed so fast in my life. We ended up making a whole new batch of dough, rolling it out and frying it Sunday morning. It was an intense two hours, but team work prevailed, and we got them all stuffed, packaged and ready for brewers. Check-in [to the Brewer’s Plate] for City Tap was at 3pm. I started packing the coolers around 1:45pm, only to find that we didn’t have enough room for all the beignets or their sauce. Oh no again! We put everything else in the truck and sent the FOH team ahead, while my sous chef and I went on a wild goose chase looking for another cooler. We ended up at BJ’s on Columbus Ave. where we did find a cooler and ice but had to wait in a huge line for 25 minutes. I thought I was going to have a heart attack. Finally we arrived at Brewer’s Plate an hour late. Luckily the health inspector had a lot of other people to inspect and wasn’t upset by our tardiness. The kicker: the heath inspector told me we didn’t have to transport the beignets cold at all, as they were only stuffed with peanut butter. Ahhhh! All that running around for nothing. Oh well. We had a hugely successful night, and everyone had a great time.

Evil Genius Beer Company‘s owner Luke Bowen:  I’m not really superstitious. The only story that comes to mind would be: I had a glass break on the bar one night at 2am. We were here hanging out, and a glass just fell off a table randomly. It was kind of freaky.

Good Dog Bar‘s executive chef Jessica O’Donnell:  I am not personally superstitious, but one story I can tell you that we joke about in the bar is about Mr. Frank Clements. When we were getting ready to open, we had several very strange occurrences. I was alone in the kitchen on the second floor with one of the guys also working on the second floor, but he was working all the way in the window. The kitchen door swung open with a serious force. Not like a wind blew it and it slightly opened; I mean, it slammed open. No one was anywhere near the door at the time! Same time the next day, a few of us were painting, etc. on the first floor. Back when it was Frank Clements Tavern, the cigarette machine used to be in the back of the bar by where the ATM is now. Again, no one was back there. We were all in the middle/front of the bar. There was the sound of change dropping and hitting the floor and rolling in the spot where the cigarette machine used to be. We ALL heard it, yet there was no change on the floor and no one was near it. Now, as I said I’m not a superstitious person, but that week I was certainly a believer that Frank Clements was with us watching what we were doing to his bar! Coincidentally enough, this was 13 years ago!

The Industry Bar‘s executive chef Bryan Burger:  The only superstition I really have has nothing to do with The Brewer’s Plate, but I have a lucky rubber duck I keep on top of the oven in the kitchen. He came to us in the middle of a rough staffing patch. Since his arrival, things have calmed considerably. Everyone knows not to touch him.

Kurant Cider‘s owner/cidermaker Joe Getz:  The Brewer’s Plate was again phenomenal this year. The participant list is ridiculous. It’s absolutely my favorite event of the year. I’ve gone several of the last few years personally. We were so happy to be a part of the evening for the first time this year with Kurant Cider. The food and beverage being served from every vendor was top notch. Everybody brings their “A” game to Brewer’s Plate. I don’t really have any superstitions.

Philadelphia Brewing Company‘s co-owner Nancy Barton:  Wow, I can’t believe it’s the 13th Brewer’s Plate. I’m not sure why, but, I think the number 13 isn’t so unlucky. I don’t really have any superstitions though. Oh, I like black cats, too!

Saint Benjamin Brewing Company‘s proprietor Tim Patton:  I’ll admit I am not at all superstitious. I also had no idea Brewer’s Plate had been around so long. My only thought is congrats for making something that cool happen for so long!

Want more? Check out food/beer folks’ answers to different questions in CCM’s recaps from the last four Brewer’s Plates here. And be sure to save the day for the 14th annual Brewer’s Plate in 2018. More info coming soon via BrewersPlate.com …