When you think of eating at a food court, do you think of being trapped in a fluorescent light semi-circle filled with chain restaurants like Sbarro and Subway? Think again. Meet Bret Goldman, owner of Ellen’s Bagels, Hoagies & More in the Bellevue Eatery in Center City Philadelphia. The Bellevue Eatery is a unique food court, as it features nearly all independent owned vendors like Ellen’s, serving homemade food using fresh ingredients (except for just two chains). I first met Bret years ago, as my office is right near Ellen’s. Over the years, I’ve gotten to know Bret and his staff really well, and like all the regular customers, I greatly enjoy talking Philly sports, weather and even family with them as they make my order from scratch. Ellen’s is unique in that it’s open early in the morning for breakfast — from eggs and oatmeal to fresh bagels (which Bret picks up daily from South Street Bagels) and even La Colombe coffee — and then transitions into a go-to luncheon counter for wraps, grilled cheese, soup, cheesesteaks, hoagies and their special chicken sandwiches (your choice of grilled chicken or cutlets) made on local Carangi rolls. It’s such a hands-on approach, which is so rare to find in a food court, that Bret and his team even make their own bread crumbs for their chicken cutlets by using the crumbs that fall from the rolls and bagels throughout the day. They’re most “famous” for their Chicken Ellen sandwich, which features chicken, sharp provolone cheese, romaine, tomatoes, onions, long hots and a secret house dressing (a tangy Dijon mustard-mayonnaise delight which some customers are so addicted to that they buy it on its own to use at home). Specials change throughout the year, like pork (and sometimes brisket) sandwiches and turkey chili in the winter and various special veggie sandwiches in the warmer months. They offer catering options, delivery and online ordering for all your office parties and recently added gluten-free options, including new gluten-free bagels from Sweet Note Bagels. Bret chuckles when he proudly refers to himself and his Ellen’s staff as “hoagie doctors,” curing hangovers and hunger on a daily (Monday through Saturday) basis. In today’s modern food world where it seems like every chef tries to overly impress by adding wild, exotic ingredients to their “sandwiches,” it’s comforting to know that there’s a traditional “taste of South Philly” easily available in the heart of Center City Philadelphia. Tucked downstairs in the Bellevue Eatery, Ellen’s prides itself on being a “hidden gem,” which many people do not know of when hustling by or shopping near the busy corner of Broad and Walnut Streets. They’re about to celebrate their 10th anniversary, which speaks volumes about the quality of their sandwiches. Here’s to ten more great years and then some! We recently sat down at Ellen’s Bagels, Hoagies & More in the Bellevue Eatery and caught up with owner Bret Goldman, who was kind enough to share his (Chocolate Covered) Memories with us … 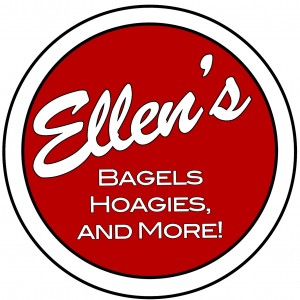 How did you end up in this niche of the industry?

My brother and I took over the Everything On A Bagel store about 10 years ago. It was two stores down. I was looking to start my own business. The opportunity came. It looked like something I could handle at the time. After about a year, we realized we were going to need something else. So we talked to our neighbor, who was Carmen from Rocco’s at the time, and we ended up taking over his hoagie shop. We pushed our landlord to join the two stores into one. Because a lot of the products were kind of similar. Chicken salad on a bagel or chicken salad on a roll. Why do we have to have two stores for that? Now we have combined the bagel and hoagie concept into one. It keeps us busy all day long. We do breakfast and lunch, and we also cater for a lot of offices throughout the city.

Where does the name Ellen’s come from?

Our mom passed away. My brother and I were bumping heads over what to name our place. It was kind of an easy one to agree on. So we named the store after our mom Ellen.

I had worked in some restaurants over the years. I delivered pizza in college. I worked at Marco Pollo in Elkins Park for one or two summers. I worked at another restaurant in Chestnut Hill. I spent some time in some kitchens. I was just busing at the time. I definitely learned everything as I was going.

What roll did cooking play in your family growing up?

My mom and her mother were pretty great cooks. They didn’t necessarily go by recipes. They would see what they were doing, taste it, and if it tasted good, that’s what we’d eat. They had a lot of good Jewish recipes. Sometimes I sell my mom’s brisket recipe. I sell that in the winter. My mom used to do it up. From the brisket to the kugel to the sweet potatoes. All the traditional Jewish dishes.

In addition to brisket, my mom made some good things like knish bread, banana chocolate chip bread, some good soups, like split pea soup.

Were you a picky eater as a kid? Any foods you couldn’t stand growing up? Have you overcome those childhood fears or do they still remain to this day? Any stuff you loved eating as a child that you would never eat now?

Ellen’s has a very local, family feel to it. Where does that come from?

When we first started out, I watched the guys before us for about six weeks and how they interacted with their customers. I thought they were really good at what they did, in terms of remembering the people, remembering what they order. I think people like that, so we try to do that all the time. Treat the customers like the locals that they are.

When this food court started out, one of the reasons I was attracted to it, was that it was a gourmet food court. Most of the stores down here are pretty fresh. There are very few processed meats. All the shops here use fresh vegetables that they slice every day. They’re cooking their own chicken instead of buying it. If you taste our chicken and ingredients, you’ll probably like ours better than the chains.

What are your thoughts about “deal” companies like Groupon?

There are a lot of deals out there nowadays. So if you are a member of that, you are just flocking to the deals. Most of the deals that are out there, I don’t think they’re really good for the owner of the business. When my deal is over, those coupon customers are just going to be turned on to a new deal somewhere else. It doesn’t really matter what form we use — LevelUp, LivingSocial or Groupon. I had one customer come up to me the other day and tell me that he’s saved $120 so far this year and that’s right out of my pocket. I was like, “Really?” I don’t think he would have come that frequently without using LevelUp. It’s hard to calculate if it’s worth it or not. I like to just do business. I like to drive traffic to my store. It’s all about finding a happy medium. That’s business. That’s what I’ve learned.

Will you eat at sandwich chains like Wawa or Subway?

I generally like to find a local store to purchase my food. Even though I swear by our fresh ingredients, I’ll go for a Wawa hoagie here and there. After all, if you put mayonnaise and cheese on anything, it’s still going to taste pretty darn good.

I remember we went to the house of our neighbor, a family friend, for Passover. This was a long, long time ago. I was really young. My mom liked the brisket and asked the host for the recipe. She made it a lot after that. It’s a pretty standard, Jewish, sweet & sour recipe that you would get if you went to a Jewish deli in Northeast Philly. We put the onion soup mix in it first. Then it’s a lot of ketchup and brown sugar and onion. I researched brisket recipes when I was getting ready to serve it here. Lots of people put Coca-Cola or root beer or Dr. Pepper. There are a few variations. Enjoy my mom’s brisket!