Skip to content
Do you ever walk by a city co-op or community garden and marvel at vegetables growing in urban settings? Have you read articles and watched TV reports about the pesticides used in big industry’s produce? Do you love local foods and find yourself wondering where the vegetables you eat at fancy city restaurants actually grow? While many people wonder about fresh produce, very few people act on such thoughts about farming and the produce industry. Meet Jack Goldenberg, Philadelphia urban farmer, farming consultant and part-time chef at The Farm And Fisherman. It’s impossible to chat with Jack for just a few moments without immediately absorbing his passion (and we mean, passion!) for farming and cooking the right way. Together with partner Adrian Galbraith-Paul, Jack gets his hands dirty on a daily basis at Hood Rich Farms in Kensington. He also champions the urban farming mission at various farms throughout Philadelphia, including one just off of City Line Avenue. We first met “Farmer Jack” (as we like to call him) through food painter Mike Geno (who calls him “Chef Jack,” as most do). Since that time, we’ve enjoyed three outstanding, meals — an intimate-yet-casual, six-course dinner at Jack’s personal home in Northern Liberties, an eight-course, pop-up dinner at Ida Mae’s (Fishtown neighborhood of Philadelphia) and a seven-course dinner at Russet (Center City Philadelphia). Not only is Jack’s passion for fresh ingredients and fine food demonstrated through his talented cooking skills, it’s equally on display by the diverse melting pot of guests who attend his farm-to-table soirees: distinguished food reporters and industry folk seated right next to urban farmers and eclectic rock n’ rollers. On a recent evening, Jack and I caught up — over some craft beers and gastropub grub at Standard Tap — and our discussion tangentially bounced about. One minute we were talking about Philadelphia farms, then the next we’re talking about the history of farm-to-table, exclusive restaurants outside of New York City, farming in Israel and the poor quality of produce in the Middle East and elsewhere around the globe. There is no doubt that Farmer/Chef Jack is currently dedicating his life (and his required 10,000 hours, as Malcolm Gladwell readers will understand) towards great success. We can only imagine what he has in store for us as his vision — and garden — grows. These last few months, we’ve been privileged to share multiple food memories with Farmer/Chef Jack, and we look forward to many more ahead. In the meantime, here are some of urban farmer and chef Jack Goldenberg’s current (chocolate covered) memories …

How did you find yourself in this niche of the industry? Any child/teenage food industry jobs?

While I was at home, during a stint out of school, I had to get a job. So I started working at a restaurant. The guy only hired me because we went to the same high school, so I started doing stuff like dishes, learning how to cut stuff, skimming stocks. Eventually, I started collecting a paycheck, somehow landed a decent unpaid gig at a good place and then went back to school to graduate. So I pretty much knew what I wanted to do for a while there, even before I got my philosophy degree. Once I got back to Philly, my buddy, who had graduated a year before me, called me up and said he moved to town to brew beer and that I should come get a room in his apartment. He had a small garden bed going, in what was otherwise a bed full of weeds and bricks and gravel, and it was quickly like swallowed up in a jungle. But it grew well, I know now, because it is like basically perfect — solarized from concrete pavement, completely full southern exposure with a 5 to 10 degree slant to the southeast, like 14 hour days in July. So he moved out to Colorado and is now a masterful brewer in his own right, and I decided to head down to Home Depot the next summer and do some gardening. It went pretty well with the miracle grow and Home Depot transplants, and I just got the idea that, because I was a chef, I could grow vegetables and sell them to other chefs. I thought it would be easy enough if I just figured out how to grow them. Things led to things, and I really got into growing vegetables. 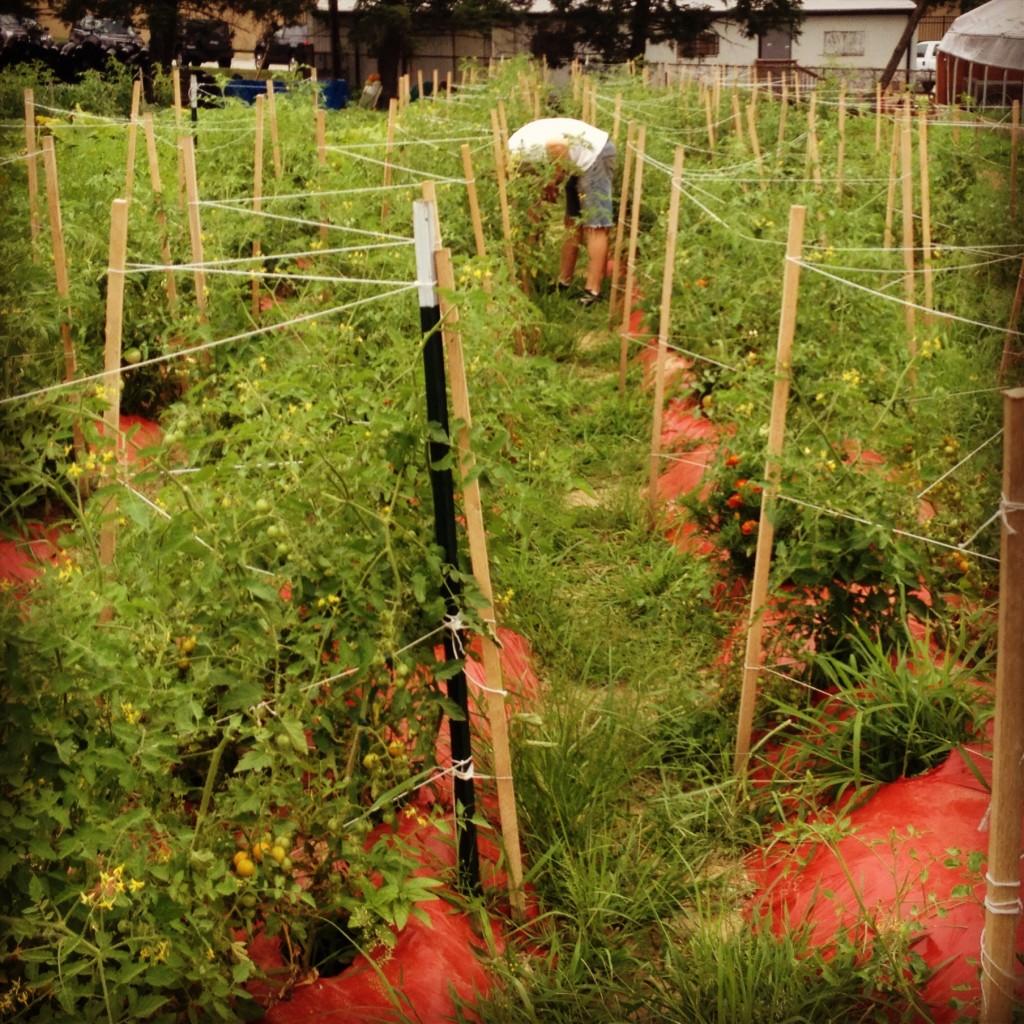 What are your earliest childhood memories of food? Favorite foods growing up?

Things like: my mom’s chocolate cake; my grandma’s cookies. Apparently I ate a lot of soup in the cafeteria, like relative to other kids. PB&J must have been a staple, I don’t really remember [eating] it [a lot as a kid], but I crave it so much today that it must be imprinted.

I always had chicken pot pie on my birthday, which was in January so kind of made sense. My mom made it like a chicken casserole that she put raw cheddar biscuits on top of and baked until the biscuits were cooked. Each person would scoop a few biscuits and the chicken and vegetables underneath. But the leftovers would be great, because it’s not like the puff pastry shell that just gets soggy and gross.

In terms of my own cooking, I had several distinct phases. The first phase was making pancakes, beginning as an every-weekend thing with my sister, which was awesome, and continuing as the only-thing-I-knew-how-to-cook-until-basically-college. Somewhere around then, I became the president of the peanut butter and jelly club in high school, which meant BYO-bread on Sundays to crush hundreds of the PB&J’s out. And that played a big role in refining my technique.

Then when I was learning how to cook, I feel like the second phase of my cooking was using tons of shit on everything. This applied to elaborate spice mixtures crusted on anything I cooked and also to meals that were just composed of everything and anything. My mom just had tons of spices around, and they all smelled good. And I had no clue how to make stuff taste good, but I just assumed it had to be something along the lines of a secret powder you added. My mom claims she still has jars from times I would crust like $200 worth of spices to cook a steak or something.

I hated mushrooms forever [as a child]. Now I have to say, they are a magical food.

Any childhood cooking accidents/injuries in the kitchen? Any as an adult?

One day my buddy asked me if I could help him do a special event at his restaurant on one of my days off. I figured I might as well enjoy the weekend, so I had some drinks. When I got over there, his prep cook was just butchering these oysters. So I tried to show her how it was done, and I put the oyster knife into one side of my thumb, out the other, and into my palm. I did the event with a towel taped over my thumb, and I didn’t even realize how bad it was until I took off the towel the next morning and my roommate just recoiled in horror. So I had to go work at Le Bec Fin, but when lunch was over, I went to my dad’s hospital — he’s a doctor — and he confirmed that it was just like a damn miracle that the knife somehow went between bone, nerve and ligament. Staggering odds. I definitely thought long and hard about the potential consequences, and hopefully that was a learning experience.

Growing up, what was your favorite meal/food/snack to eat outside? Did you enjoy eating outside anywhere in particular?

Outside … well, I remember hiking trips meant eating gorp, which was amazing. That could be the whole reason for the second half of my core diet, along with PB&J, being trail mix. Another one of those deep-seeded things. Hiking trips also meant pitas with bizarre combinations like pepperoni, jelly and cheese. Those did not have staying power.

I actually came up with a few “original” dishes and recipes I’ve been legitimately proud of, and I was trying to remember them, when I realized I had no idea what I thought they were at the time. I guess that shows what originality is worth in cooking. I figured the next-best thing to do is to tell you how to make some delicious stuff from what’s in season during the summer.

So my question to CCM readers is: What do you do with overripe or cracked tomatoes? Answer: Enjoy my Tomato Confit & Tomato Sauce recipe!

Jack Goldenberg is a Philadelphia urban farmer and part-time chef at The Farm And Fisherman. Together with partner Adrian Galbraith-Paul, Jack gets his hands dirty on a daily basis at Hood Rich Farms in Kensington. He also champions the urban farming mission at various farms throughout Philadelphia, including one just off of City Line Avenue. For more information on Jack’s farms and pop-up dinners, follow him on Twitter and Facebook.