In Search of Beer‘s Ryan:  My grandmother’s German potato salad (though, having been to Germany, I would now question its authenticity) has been a staple at family gatherings my entire life. It’s always the most-requested food whenever anyone is in town to visit my mother and probably the recipe she’s given out the most. Since my family couldn’t make it into town for Christmas this year, LeeAnne did her best to give me a traditional Hudak Christmas Eve dinner, and this, of course, was included. Everyone loved it. The recipe is presented in bulk, because that’s the only way my mother knows to cook. Enjoy! 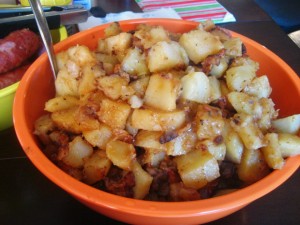 Servings:  10-15 generous servings — probably closer to 10 for us, the way my family eats; my mom usually doubles this recipe for family gatherings

A Few Notes:  My grandmother boils the potatoes in their skin for flavor and then peels them, but my mom usually does it the other way around because it’s easier. You may have to adjust the water or vinegar to taste. The amounts are guesses because, like any good cook who’s been doing something most of his or her life, my mom doesn’t measure anything. And when I mention a “gravy-like sauce,” I mean brown gravy, not South Philly gravy. 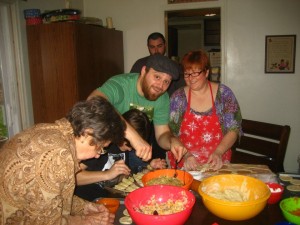