Artists often times paint apples, oranges and bananas when working on their composition skills. However, painter Mike Geno has taken food composition to a whole other level. In graduate school, Mike’s attention was focused on painting toys, like rubber ducks, for example. He finds something expressive in still figures, be it lines or curves. One day, broke and hungry, Mike joked with his grad school friend that he was so famished that he wanted to paint a big, juicy steak. They laughed, and then Mike thought, Why not?! He went to a butcher shop the next day, told the butcher what he planned to do, and left with a large porterhouse steak, which he proceeded to paint (and then eat, of course). Mike was then flattered to receive a very positive response to his steak painting from visitors to his studio. Just like that, the painter had stumbled upon his niche. Since that first steak painting, Mike Geno has many series of paintings focused on food: steaks, bacon, cheeses and Philadelphia staples, like Tastykakes and soft pretzels. By painting food, Mike entered a new world of food lovers and opened many of their eyes to art. After all, how many butchers, cheesemakers and Philly Tastykake lovers wanted to visit art galleries before Mike brought their passions to canvas? Mike has painted well over 35 different cheeses so far, and his cheese paintings have been featured in Culture magazine. We caught up with Mike Geno, not over meat, bacon or cheese, but rather, over nachos. When Mike described our plate of nachos as “pretty,” we were convinced he had some great chocolate covered memories of his own to share … 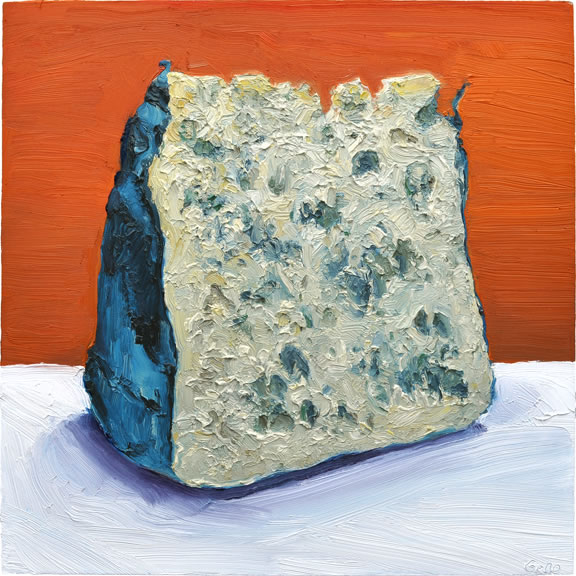 I’m a huge Thanksgiving fan. Coming from an Italian family, I loved how Thanksgiving balanced out our traditional Italian dishes. Food is a great connector. It helps people relate to one another. My mom taught me to always cook more than we could possibly serve/eat for a party. If six people were coming over, cook for twelve. No one leaves hungry, is my mom’s motto. Thanksgiving is my mom’s favorite holiday, too, because it’s about food and family. 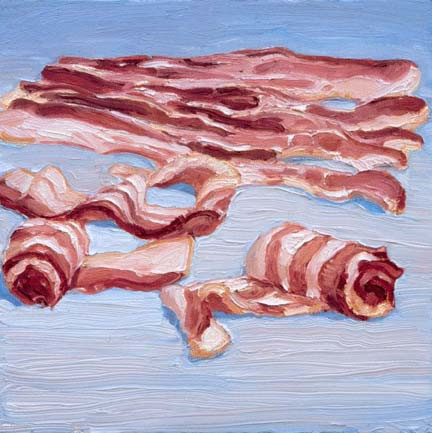 My mother is my inspiration, when it comes to food. She is Scottish-Irish and grew up with very plain foods: meat and potatoes and roasted chicken, for example. My father is Italian, and his mother was a tremendous cook. However, my grandmother would not share her recipes with anyone, let alone my mom. Surprisingly, my mother learned that she really loved Italian food, so she set out to teach herself how to cook. When I grew up, I asked my mom for her recipes, and, of course, she shared them with me.

My mom understands her ingredients the way I comprehend my paints. We both know how they will react under various circumstances and mixing them with other ingredients/colors, based on decades of use. You don’t have to be scared to combine things. 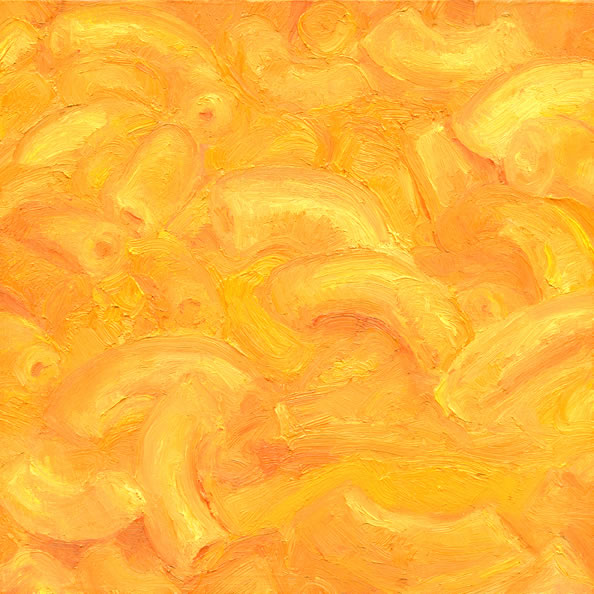 Strangely, it’s a merger of my childhood and my career. I first really recognized the extent of my love for food  when I had to leave town for graduate school in Southern Illinois. I couldn’t find decent bread anywhere in the mid-West. Philly is so blessed: Sarcone’s bread, DiBruno Brothers’ cheese, the Reading Terminal Market; heck, even soft pretzels, Tastykakes and hoagies. This last decade, as my paintings focused more and more on food and I learned about–and tried–so much diverse food, my love for food has grown so much stronger. 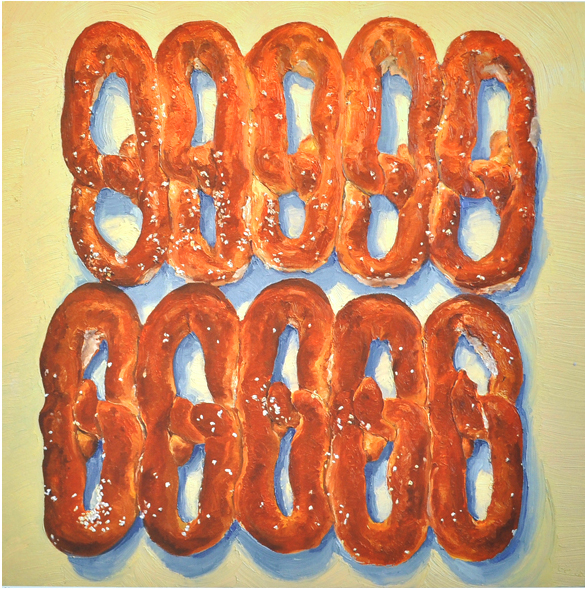 Being the youngest child, I vividly remember being at home, when I was maybe 4 years old, before grade school began, just my mom and I. Any random time of the day, when it was just the two of us, I remember my mom making instant mashed potatoes with salt, pepper and butter on the top. We’d eat that snack together, just the two of us. Also, mom’s spaghetti and meatballs, which she later taught me how to make from scratch. I made that dish for grad school parties all the time. And my mom never turned her back on her own upbringing: she makes a killer pot roast. 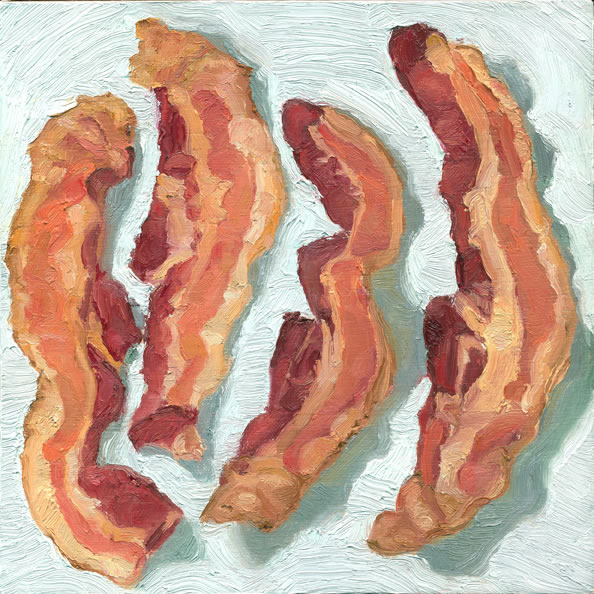 Did you have an affinity for meat before you started painting steaks and bacon?

I was a meat cutter at BJ’s Wholesale Club in Northeast Philly for about five years after high school. I always liked meat but never considered painting it. Maybe I had a random thought that the visuals in a butcher shop would make for good photography, but never paintings. Ribs, for example, have an amazing pattern in them, as do extra fatty meats. Everything I learned working in the meat department was an education that I didn’t really value until much later in life when I started painting foods, especially bacon and steaks. Knowing the different cuts is something people don’t always understand, see or appreciate. 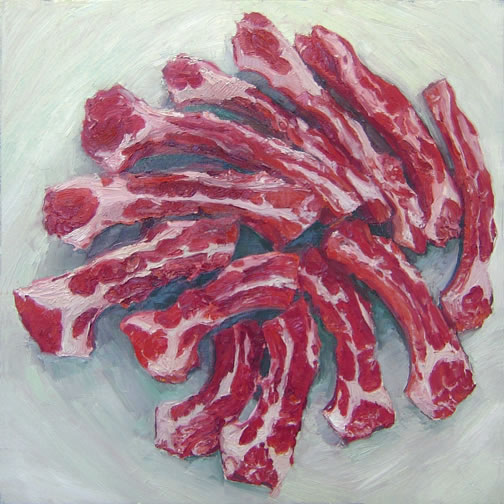 With all this meat talk, we might as well ask: What’s your favorite steak?

To eat? Rib eye steak. To paint? All meat is beautiful. A porterhouse is so large and juicy. 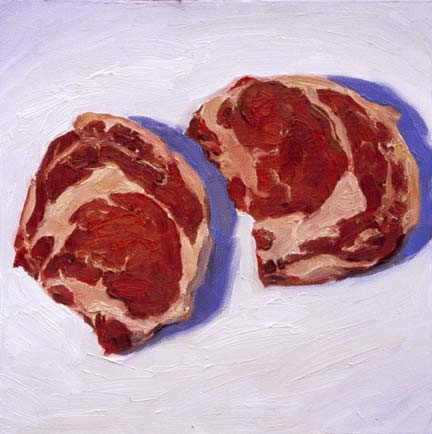 From meat to cheese. It doesn’t sound like you’re a vegetarian.

My painting style matches perfectly with the texture of cheese, because there is so much texture when it comes to cheese. Now, when I paint cheese, cheesemongers don’t just tell me what a cheese tastes like, they tell me why it tastes like that, what the specific cows ate, the history of the cheesemaker and more. 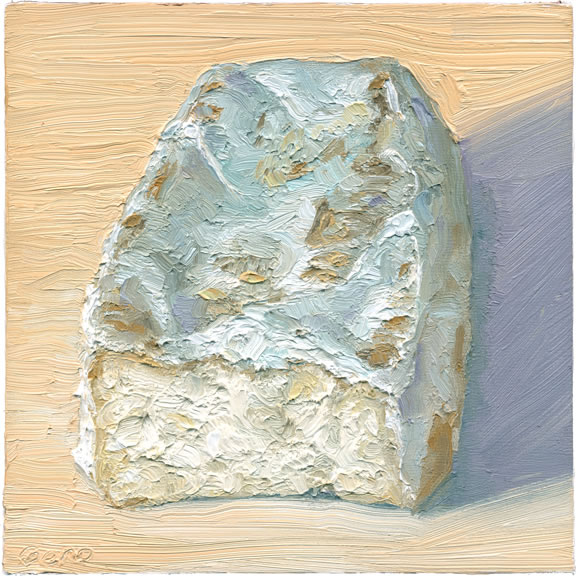 Again, we might as well ask: What’s your favorite cheese?

There are so many. To me, as I prepare and paint, the history of the foods I paint is as important to me as the plain physical appearance. These foods represent certain things to certain people. Bobolink Dairy (Milford, New Jersey) makes a great Drumm cheese. Winnermere (Vermont) is a cheese that’s so creamy that it can be served on a spoon like gelato. Montgomery’s cheddar (England) is so highly regarded that it practically has a cult following. It’s so creamy and buttery; it took my understanding of cheddar to a much higher level. Honestly, before I became versed in the cheese world, my favorite cheese was, admittedly, probably Cracker Barrel. 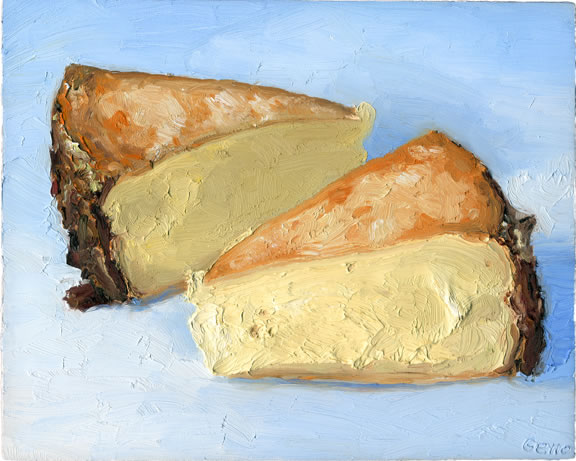 To paint? Butterscotch Krimpets. To eat? Same thing. That sweet snack is iconic. 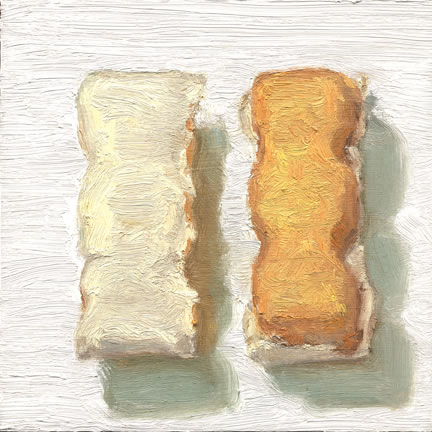 Any funny food memories that you want to share?

As you may know, a porterhouse steak is half filet mignon and half strip steak. When I was young, my mom used to offer me the larger portion, and I thought I was making out like a bandit. Then, as I got older and worked in a meat shop, I learned that she had been hogging the higher end filet for herself. I wouldn’t consider that a “deal” anymore, that’s for sure.

Large chains have always been so dominant in our society, and that industry loads their foods up with tons of preservatives, salt and fat, trying to get us to eat more. I mean, just look at the horrible bleaching that companies, like Wonder Bread, do to white bread. As a nation, I feel like we’re cooking for ourselves much more now, and this comforts me. Our current cooking movement signifies that education has spread, be that due to cooking shows on TV, like the Food Network, for example. We’re learning faster now with the Internet, and we’re choosing to cook ourselves and are less likely to eat at chains. I’ve always wondered what would happen if really good restaurants opened in chain-dominated, suburban areas. Education leads to better choices, and that is good for our food and community. 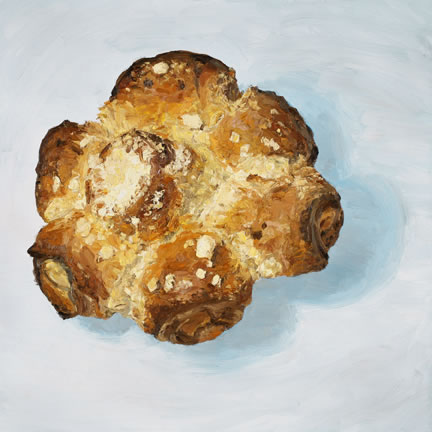 What family recipes would you want to share with us?

My mom’s twice baked mashed potatoes are like potato crack. I was raised with them being a staple at Thanksgiving. My siblings, folks and I would elbow each other out of the way, fighting for the crispy edges. Now, I even make them on my own.

Most of what I’ve learned about cooking is from my mom, and she cooks to bring a group together. Therefore, I only feel comfortable cooking a lot at a time. So I encourage you to make as much as you can and share with others. Enjoy my mom’s Twice Baked Mashed Potatoes!

Mike Geno is a Philadelphia-based artist, who often focuses his studio practice around food. He teaches at Moore College of Art and Design, when he’s not organizing foodie groups. For more about Mike Geno and his work, visit: www.MikeGeno.com