Pastry chef Justin Relkin is a magician, with and without food. Sure, when you first meet Justin, he might wow you with some brilliant card tricks. Time and time again, he knows exactly what card you selected out of a deck, but what he really knows how to do is make magic with chocolate and desserts. I’ve sampled Justin’s amazing baking at many events, particularly at our running group soirees. These are just some of the kind of desserts Justin bakes for “fun” (and is kind enough to share with his fellow runners): a crazy-layered cake consisting of Guiness spice cake, Rice Krispies croquante, caramel mousse, orange Bavarian-caramel glaze, almond macaroons & cream puffs with a biscuit base (yes, that’s just ONE cake!); a triple-layered cake consisting of red velvet cake, vanilla pound cake & white sponge cake with chocolate filling and raspberry jam in between (again, that’s ONE cake!); and a double-layered cake consisting of milk chocolate shortbread & chocolate cake, filled with vanilla crème brûlée & candied PBC Walt Wit beer and topped with buttercream icing (again, just ONE cake!). We recently caught up with Justin and chatted about his own Chocolate Covered Memories and magic … with food. 😉

What are you earliest childhood memories of food?

I grew up in Brooklyn, New York, in a house with two apartments in it. We lived on the first floor, and my grandparents lived on the second. As a very young kid, I used to eat about six times per day, because I’d eat at home, then go upstairs to see Grandma, who would invariably feed me again. Specifically, my first food memory is probably the smell of chicken soup on the stove in my grandma’s kitchen. It’s very powerful … in a good way. 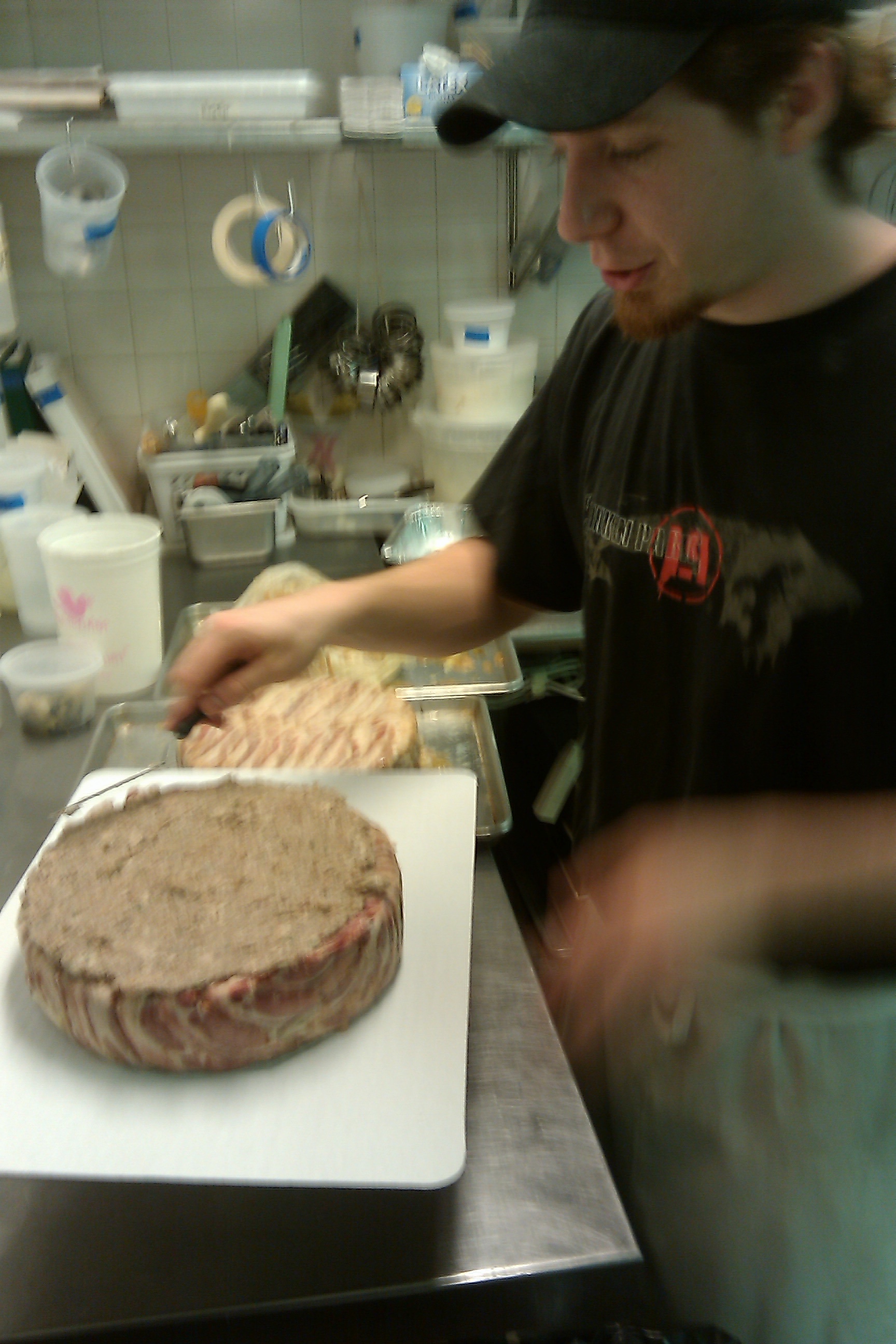 How is food a part of your daily life?

Food is a great way to share who you are and where you’ve been. As a working professional in the food industry, we often look at a day’s “prep” [preparation] as a set of tasks, a challenge to overcome. But at home, it’s a different story and can be whatever you make of it.

It’s a mixed bag of stuff for a mixed bag of reasons: Mom’s meatloaf and sausage and peppers; Dad’s roast pork (from Landi’s Deli – accept no substitute) on garlic bread; Entenmann’s Devil’s Food Cake; and Mallowmars. 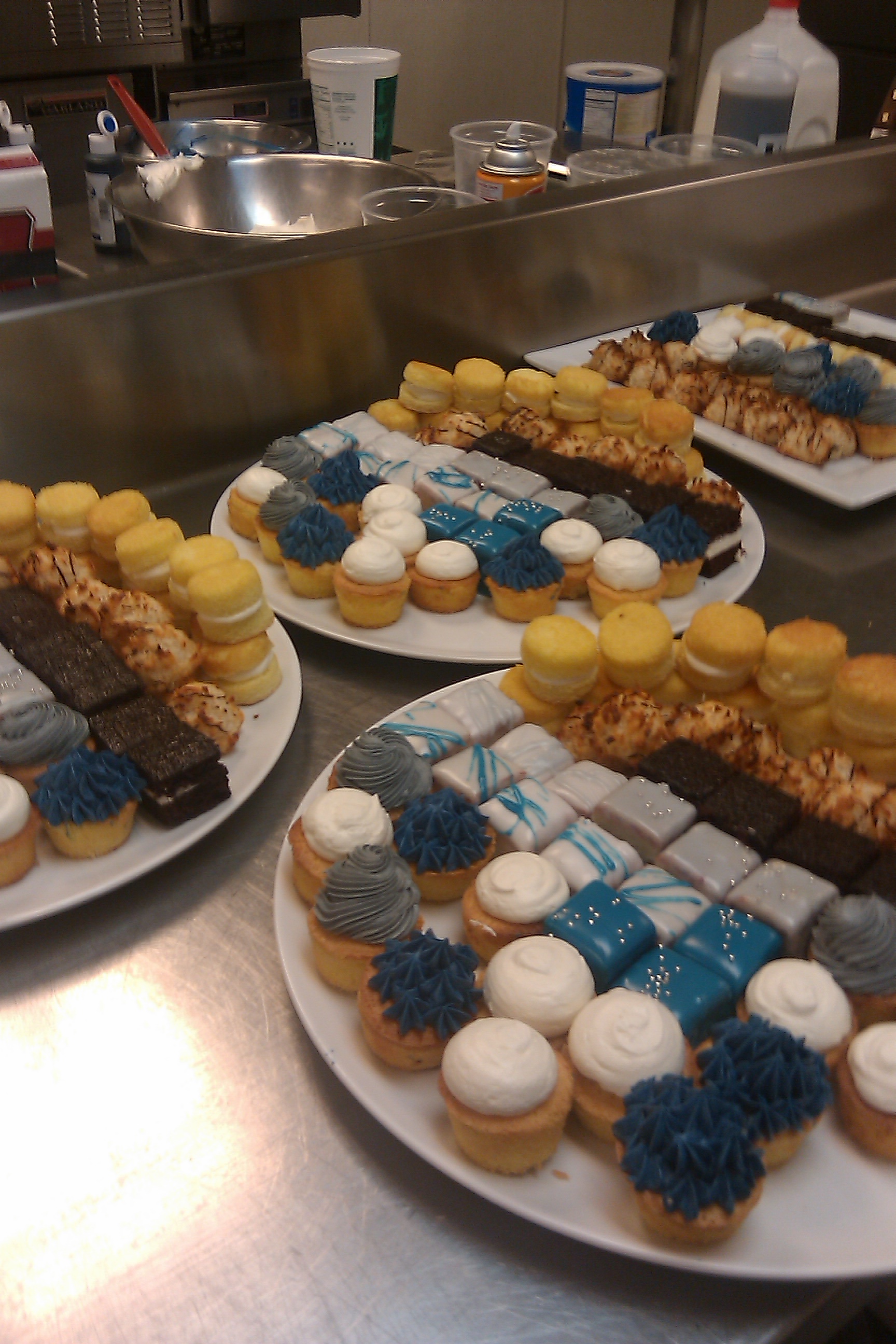 The first professional kitchen I had any contact with was as a waiter at a summer camp, when I was about 14 years old. I remember being amazed at how big everything was. They had a soup kettle taller than I was! I remember watching a guy stand at the flat top and flip eggs for about 30 minutes. The same task, over and over, the same way, every time. I remember being struck at that moment that this was a different world than just messing around with food at home. In a “real” kitchen, there are real people expecting to be fed quickly and consistently. You can’t just do what you feel. I remember not being turned off by that moment as many people might have been. In fact, it drove me to be the pastry chef that I am today. 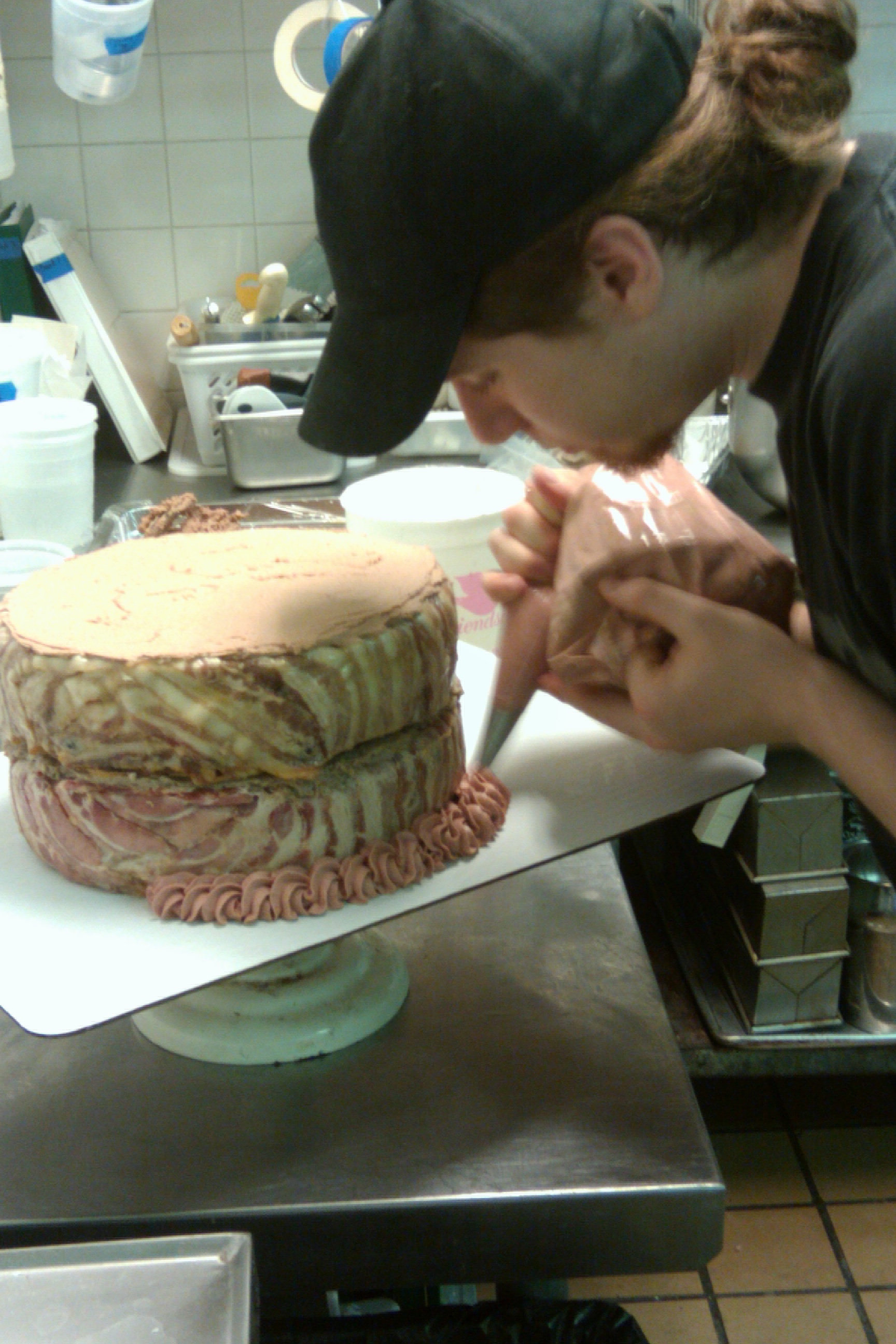 What do you think of the modern food world where Whole Foods and Boston Market encourage us to buy already-prepared meals?

I think that stuff is fine, in and of itself. Sure, there’s a difference in quality between those two examples, but, in general, I have no problem with people buying prepared meals. Some of us are busy and have stuff to do. And, let’s be honest, if everyone cooked all their meals at home all the time, I’d be out of a job. With that said, I do, however, have a problem with the fact that it seems many people not only do not, but instead, cannot cook for themselves. It’s as if their cooking muscles have atrophied, and we, as a culture, can’t get them back. Even the basics, like cooking an egg or making a simple loaf of bread, are daunting tasks beyond the realm of comprehension for many people I’ve met. That worries me.

What family recipes would you want to share with us?

My family didn’t have an awful lot of recipes. They often cooked by the “dash of this, sprinkle of that” method, which, as a pastry chef, would now drive me completely nuts. One unusual dish, reserved pretty much for holidays, was a slow cooked breast of veal that would be simmered in duck sauce (like from a Chinese restaurant) and orange juice until it was tender. I will also say though that the secret to Grandma’s chicken soup was to use a Kosher chicken. It seriously makes all the difference.

Instead of sharing one of these recipes, since CCM focuses on childhood food memories, I thought I’d share a recipe for a dessert that is perfect for children and for bringing out the child in all of us: “Junk Food” Brownies.

Justin Relkin grew up mostly in Central Jersey and graduated from the Culinary Arts at Johnson & Wales University. Justin worked at the Ryland Inn (Whitehouse, NJ) before moving to Philadelphia. Justin literally “fell” into pastry when the pastry chef at the Global Dish catering company quit and Justin volunteered to learn how to bake on the fly. Since then, Justin has worked at/baked for Supper/Global Dish/Lemon Hill, Twenty21, Parc and briefly at Barclay Prime (all in Philadelphia).