When we began this CCM site, we knew right away who we wanted to interview first: This Little Piglet‘s Lia. I have been friends with Lia and her husband, Daniel, since we were all goofy, shy freshmen in college. When I learned how food-oriented they were, I knew right then and there that we were kindred spirits. To my amazement and awe, Lia has been food-blogging away about the Brooklyn/New York City food world (and their grand travels to Daniel’s native Brazil and beyond) since 2006. Now, years later, I get goosebumps (if not flashbacks) seeing how much love they bestow on their adorable sons, Nico and Leo, expressing so much through their sharing of fine food. We recently caught up with Lia to ask her about her own Chocolate Covered Memories …

What are your earliest food memories?

I vividly remember going to the local diner with my grandfather on Sundays. He’d let me order a coffee (at age 5) and a donut but only on the days my grandmother didn’t join us. She was always ready to rain on my parade and tell me how unnatural all the things I wanted to eat were. The funny thing is that I’m very similar to her these days and try to buy the best food and ingredients whenever I can. I try to steer clear of ingredients I can’t pronounce and keep things as fresh and unprocessed as possible. Salad was big in my family, especially chicory with a lot of balsamic vinegar. I remember my dad making lots of salads. My brother and I would gather around and use our fingers to pull out big, bitter leaves that I learned to love.  To this day, I love salads with a lot of vinegar.

Well, obviously a lot of it comes from my family and childhood, as my mother is an amazing cook and food played a big role in our family. But, to be completely honest, overall, I was a very picky eater growing up and it wasn’t really until I lived abroad during college that I developed a deeper appreciation for good food and ingredients. I was studying for a semester abroad in Paris and living with a host family. While at first I did not understand their long, multi-course, homemade meals (twice a day, mind you), my host family, the Colliantiers, encouraged me to try everything, from mussels and pate to every stinky cheese one can imagine. Looking back, my time dining in Paris and throughout Europe ignited my love for food that has since never ceased.

So your love and memories of food do not stem entirely from family?

I am surrounded by amazing friends who equally share their love for food. In fact, when I married Daniel (who once asked me out when reclaiming some forgotten forks and knives after a college dinner party I’d hosted where my guests had to bring their own silverware), my friend Tara surprised us with a black binder full of recipes from all of our friends and family. Even though our shelves are now overflowing with cookbooks (thanks to my job at Food Network), these are the recipes I cherish most: from silly George Forman grill recipes to friends’ family recipes (especially Kristen’s Grandma’s Crumb Cake) to handwritten “recipes for love.” 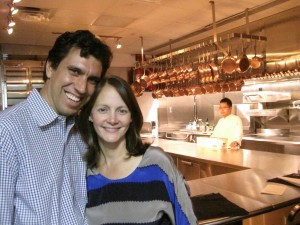 How do you feel about the food world today?

In many ways, I think places like Whole Foods and Trader Joe’s have helped make people want and demand better food everywhere they go. I think any so-called “problem” with our modern food world lies more in all the distractions we have these days (technology, mainly) and less with the big supermarkets. The food world has exploded, and many more people seem to genuinely care about what they’re eating. I, too, have lots of memories of big family gatherings for the holidays with tons of home-cooked meals, but today families are spread out all over the country. The world, restaurants and supermarkets realize that and are trying to fill a niche. Some people just cannot cook, but the fact that they’re choosing to go to Whole Foods or to a restaurant for Thanksgiving shows that they’re still interested in good food. People in middle-America can now have access to the ingredients they heard about on Food Network, which probably were not available in smaller markets in the past. People are definitely busier these days, and it is hard to prepare homemade meals every night. Yet I still think lots of families are making home-cooked meals.

If you read food blogs, it seems like lots of other people are trying to do as much as they can to keep homemade foods prevalent in their modern homes and daily lifestyles. In my opinion, home cooking is thriving. It’s just that the food world in general has exploded these last few years. So food now means many different things to everyone. For some, it’s a scene; for others, it’s all about dining out at restaurants all the time; but I still think there’s a lot of cooking going on in homes as well. 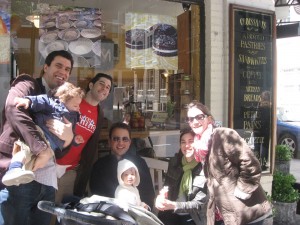 How do you live a healthy, affordable, foodie life while living in a major city?

Living in Park Slope, which is an area in Brooklyn which has a reputation for being really crunchy and organic-obsessed, I might have an advantage. The Park Slope Food Coop, which my family and I belong to, started here in the 1970s and is still going strong. It is one of the largest cooperative supermarkets in the country with over 15,000 members. People here really care about their food. And, even though there are so many great restaurants to visit, it’s just not possible to eat out and order in a lot when you have little kids.

As someone with two young children, how are you raising your sons in this modern food world?

Admittedly, I’m not making the elaborate recipes like I used to before starting a family, but I’m still trying whenever I can to cook with my kids and get them interested in food. And, believe it or not, it’s working. Nico and Leo have become foodies in their own ways. Leo just loves to eat and is up for almost anything. They both love aged gouda and have never given string cheese the time of day. Nico loves roasted sweet potatoes, tofu (sprinkled with flax) and avocados (with olive oil, a pinch of salt and a big splash of balsamic vinegar). He even “makes” his own lemonade after “mastering” our electric juicer last summer. 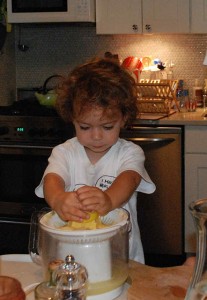 My mother is a fantastic cook, who, like me, enjoys cooking alone and loves leftovers. So, first is my mother’s award-winning lasagna, which was originally mixed together when my mother had a lot of leftover, homemade, arugula pesto. Second, is my mother’s award-winning goat cheese and mushroom meatloaf. (No, my mother is not a recipe contest maven. She has only entered three contests ever and won awards in two of them!) Enjoy these (award-winning) food memories! 😉

Lia launched the food blog This Little Piglet in 2006, sharing her food adventures in Brooklyn and beyond. Lia has worked at Food Network and lead private food tours in Brooklyn. Currently, in addition to writing for TLP and being a mom to two little boys, Lia writes for iVillage, Mommy Poppins and baby gooroo.